Three former Canadian soldiers will visit South Korea this week for a symbolic ice hockey game to celebrate the 2018 PyeongChang Winter Olympics, six decades after their participation in the Korean War, a ministry here said Monday.

The Ministry of Patriots and Veterans Affairs has invited the three men -- Dennis Moore, Claude Charland and John Bishop -- to a six-day program to start on Wednesday. All of them are in their 80s. 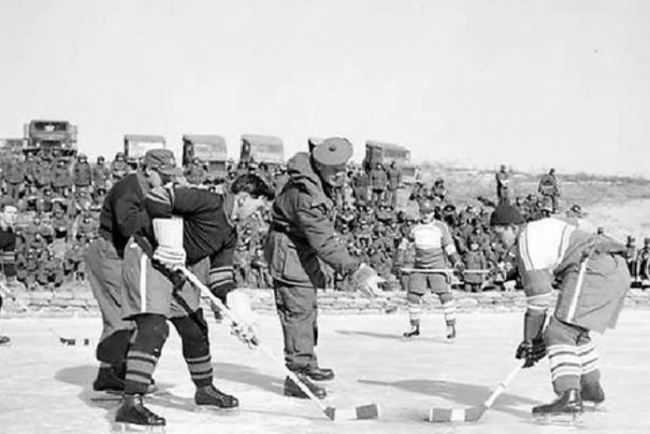 Canadian troops play an ice hockey game on the frozen Imjin River during the 1950-53 Korean War in this file photo. (Yonhap)
The highlight of their visit will be the so-called Imjin Classic.

Canada dispatched tens of thousands of combat troops to help South Korea defend itself from a North Korean invasion in the 1950-53 conflict. Some Canadian service members played their country's favorite winter sport on the frozen Imjin River, near the current inter-Korean border, during the war.

South Korea and Canada have arranged friendly ice hockey games to reenact the Imjin Classic and commemorate Canada's role in the war and their close ties.

This year's event will take place on the river on Friday, two weeks ahead of the Winter Olympics in PyeongChang, an alpine town east of Seoul.

Minister Pi Woo-jin will drop the puck, according to the ministry. (Yonhap)