Studying North Korea, the notoriously isolated and closed country, poses many challenges, the most basic of which is the lack of reliable data.

Data from North Korea is incomplete at best -- if not misleading -- and data released by various organizations tend to be biased depending on their ideological orientations.

The picture that emerges of North Korea in “Unveiling the North Korean Economy,” by Kim Byung-yeon, a professor at Seoul National University, published in English by Cambridge University Press last year, may come as a surprise to many. 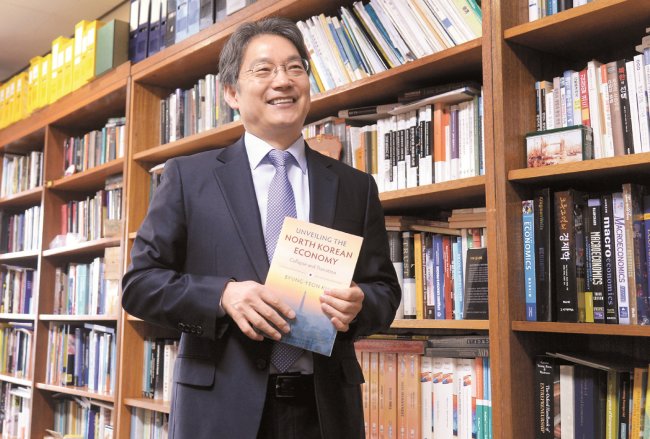 The day before an interview with Kim, I happened upon a television documentary that chronicled a US-based Korean journalist’s 21-day trip in North Korea. Video footage showed broad avenues in Pyongyang lined with futuristic-looking apartment buildings, and taxis awaiting passengers at taxi stands. Supermarket shelves were packed with goods and people were filling their shopping carts.

During a trip to Pyongyang in 2005, I was surprised by the city’s many high-rise buildings and the Ray-Ban sunglasses and leather bomber jackets fashionably worn. Granted that this was Pyongyang -- a city of the selected elites -- the change in the cityscape since then was remarkable.

How was such transformation possible?

After hitting rock bottom in the late 1990s during the great famine, also known as the “Arduous March,” North Korea‘s economy began its recovery, fueled by profits from the export of minerals. “In 2010, the international price of minerals jumped threefold,” Kim said, adding that the increased demand for anthracite from China for operating its power plants allowed North Korea to build a foreign exchange reserve.

“It was a barter trade of sort. China would invest in equipment and North Korea would repay with anthracite,” said Kim during the interview with The Korea Herald at his office on Jan. 5.

He added, “I gather North Korea made a killing.”

It is suspected that part of that money went toward developing North Korea’s nuclear weapons program. Some of that money also went to building the swanky modern buildings along Yeomyeongro in Pyeongyang, Kim said.

Swiss-educated North Korean leader Kim Jong-un wanted to show off and this led to the construction of new buildings, the professor suggested.

“It is a demonstration of ‘Kangseongdaeguk,’ he said, referring to North Korean political ideology that emerged in 1998 and calls for the realization of an economically wealthy and militarily strong state.

Kim Byung-yeon is critical of the buildings, arguing that it is a “total waste” of money to build flashy buildings and factories that produce goods of a “primitive” level.

North Korea could put its money to better use by building businesses, said the professor. “Adam Smith said that wealth lies with productivity. Kim Jong-un should read Adam Smith.”

Many of the residents of the high-rise buildings, built partly with money put up by “donju,” or people with capital, pay up to the equivalent of 250 million South Korean won ($235,000) for an apartment unit.

Kim is adamant that the sanctions in place against North Korea should continue to be strictly enforced. For those who claim that sanctions have been ineffective in curbing North Korea’s nuclear ambitions, he pointed out that the old and new sanctions are structurally different.

“After the fourth nuclear test, the sanctions have focused on banning trade. This is like blocking the entrance to the lion’s den,” he said.

Professor Kim’s interviews with 180 Chinese companies that conduct business with North Korea show that more than 70 percent of their North Korean counterparts are entities owned by North Korea’s party and military officials.

“The Chinese companies import at lower than global market price (in the accounting books), and the difference is given to the North Korean exporters as a kickbacks,” he said.

“This accounts for 7 percent of all sales and kickbacks amounted to an equivalent of South Korean 400 billion won annually at the peak of their trade. This is more than four times the income of workers at the Kaesong joint industrial park.”

Furthermore, more than 70 percent of the North Korean businesses exporting minerals are owned by the party and the military, meaning the money earned is channeled to the military.

“There was a need to block this,” he said, adding that UN Resolution 2270 had too many loopholes. Today, all mineral exports are banned.

“Now there is no export of anthracites, and North Korea is trade dependent, contrary to what many people think,” he added.

North Korean studies have so far not been based on scientific studies, observed the professor. “We are responsible for much of the North Korea policy failures. People are also very ignorant about North Korea, just fighting along ideological lines,” he said.

The public’s ignorance stems from the fact that they have not been told the reality and also the simple lack of facts. Kim blames politicians who have used North Korean issues for political gains.

He emphasized the importance of studying North Korea’s economy in understanding the country, saying, “With economics, it is relatively easy to establish facts.”

Of the motive for his book -- a culmination of seven years of research, including surveys of North Korean refugees who have settled in South Korea and Chinese companies that do business with North Koreans as well as reconstructed macroeconomic data -- he said, “Once you have the facts, they can be incorporated into policies.”

“My book is an attempt to look at the North Korean economy through data. Only then can you get an accurate picture.”

And according to the professor’s research, the North Korean regime is one that is very much dependent on trade. “We have not been able to see the changed North Korea,” he said.

The North Korean economy is not as isolated from the global economy as is commonly thought, he explained. Hence, his high expectations for sanctions to bring North Korea to the negotiating table.

Right now conditions are favorable for sanctions to work, with China determined to enforce them and Russia unlikely to break sanctions publicly. For South Korea, this is a time to be firm. “We should signal that we will strictly enforce the sanctions,” he added.

In addition, close cooperation between South Korea and the US are necessary, Kim maintained, expressing doubts over whether South Korea is fully utilizing its resources off the coastal waters in enforcing the sanctions.

Kim is confident of the effectiveness of the sanctions that are in place, noting North Korea’s trade with China had dropped by one-third by the end of 2017.

This year more than 90 percent of all its exports will be blocked, causing the economy to grow at minus 5 percent or less, he projected. “By way of comparison, South Korea’s economy recorded minus 7 percent growth during the Asian financial crisis,” he said. “North Korea will really feel the pressure in the middle of this year.”

North Korea will not accept denuclearization but the regime’s strategy has been one of increasing its negotiating price, Kim explained, while the US tries to lower that price through sanctions.

The fundamental issue is North Korea’s marketization, according to the economist. “In the long term, nuclear weapons will prove to be an impediment,” he said.

Kim is of the opinion that North Korea does not know how it will open its market. “They talk about ‘our way’ but I don’t think they know just what ‘our way,’ is,” he said.

Likewise, much of the rest of the world is ignorant about the transformations that have been taking place in North Korea since the mass famine of the 1990s, focused on that country’s nuclear threats at the expense of looking at the whole picture, according to Kim, who urged the necessity to prepare for a future in which North Korea is economically integrated with the South.