[ The Korea Herald – Send E-mail ]
[PyeongChang 2018] Booking rate still below 30 percent
By Bak Se-hwan
Published : Jan 12, 2018 - 15:17
Updated : Jan 12, 2018 - 16:58
The PyeongChang Olympic Winter Games are just a few weeks away, but the booking rate for accommodations in Gangwon Province remains below 30 percent despite the government’s effort to crack down on price gouging. 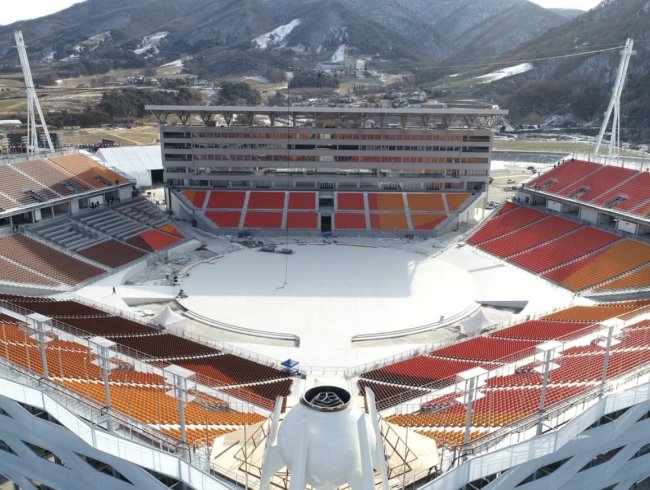 The Olympic Plaza in PyeongChang, South Korea, where opening and closing ceremonies will be held. Yonhap
As of last week, 16,744 individual rooms have been booked ahead of the games out of 67,879 rooms at 4,797 accommodations, according to the PyeongChang Organizing Committee.

While rooms in brand hotels and resorts are already booked by the committee, the owners of some local lodgings still refuse to take reservations from individual travelers, with the average rate for accommodations remaining over 250,000 won ($235) per night, four times more than normal prices.

The rate once spiked up to 800,000 won before the Ministry of the Interior and Safety started running an intensive pricing clampdown last month.

“The current booking rate is lower than expected but we expect that the rate for accommodations will increase as the start of the Olympics nears. We also run the Olympics Information Call Center (1330, without area code) that provides four different languages to assist tourists in finding lodging,” an official from the committee told The Korea Herald.

As part of efforts to attract more foreign tourists, Gangwon Province Gov. Choi Moon-soon vowed to stabilize the prices of accommodations, which face criticism here for ripping off tourists.

In addition, the government will crack down on lodgings that cancel reservations to take larger groups of athletes, or fail to meet hygiene standards during the international event.

Meanwhile, the Olympics call center accepts complaints from foreigners in English and other languages. It was set up last November to boost ticket sales for the games, the committee said.

Around 64 percent of the planned 1.07 million tickets have been sold as of last week, according to the committee. The Winter Games are scheduled to be held from Feb. 9 to 25, hosting 102 events across 15 different sports at 13 venues in Gangwon Province.