[ The Korea Herald – Send E-mail ]
[Newsmaker] LG to shift strategy on money-losing smartphones
By Shin Ji-hye
Published : Jan 11, 2018 - 20:50
Updated : Jan 11, 2018 - 20:54
LAS VEGAS -- LG Electronics’ chief said it will no longer set a regular timeline to launch smartphones as it has done over the past years, in an apparent strategic move to help its struggling smartphone business, which has been losing money for 11 straight quarters.

“We will unveil new smartphones when it is needed. But we will not launch it just because other rivals do,” said LG Electronics Vice Chairman Cho Sung-jin on Wednesday during a press conference at the Consumer Electronics Show in Las Vegas. He was responding to a question on when the firm would launch its new flagship smartphone LG G7.

“We plan to retain existing models longer by, for instance, unveiling more variant models of the G series or V series,” Cho said. 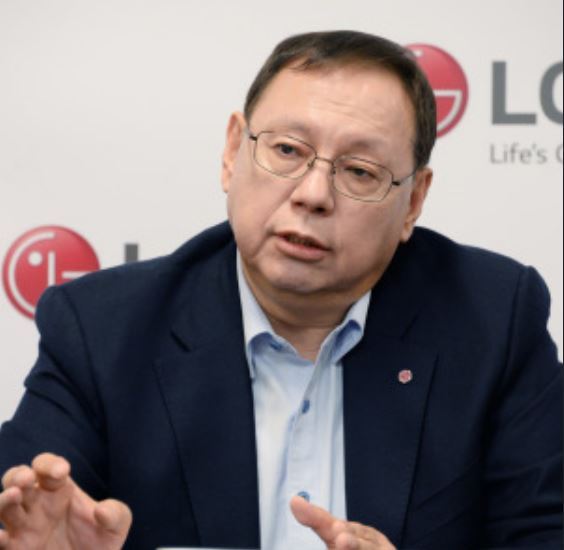 As for why the strategy on smartphones will be changed, the chief said, “We found it is important to retain a good platform for a long (time) and concerns rise over the supply of lithium materials.”

Although he did not mention the smartphone unit’s financial losses, the announcement appears to reflect the firm’s scale-down of its phone business amid slow growth in the global smartphone market in contrast to the firm’s flourishing appliances and other sectors.

LG’s mobile communications unit is expected to report a financial loss for an 11th straight quarter in the October-December period last year.

The mobile unit was not able to make a turnaround last year, as the bulk of its earnings came from budget phones, not flagship models. Its smartphone business reduced losses by more than 40 percent last year compared to the previous year, reaching around 700 billion won ($650 million) in losses.

Analyst Park Won-jae of Mirae Asset Daewoo Securities predicted LG’s mobile unit would once again fail to make a turnaround this year, but it would further reduce its losses to 184.7 billion won.

Cho also talked about the firm’s business plan for its robots powered by artificial intelligence and autonomous driving, which the firm has been revealing since it announced early last year that it would foster its robot business as a future growth engine.

“The robot business is not profitable now and it is not a huge business for the time being. But we are raising its brand profile now and the business is expected to make profits in two to three years,” Cho said.

Many technologies are needed for robots and LG cannot do all that alone, he said. “We plan to acquire small companies and invest in related business.” 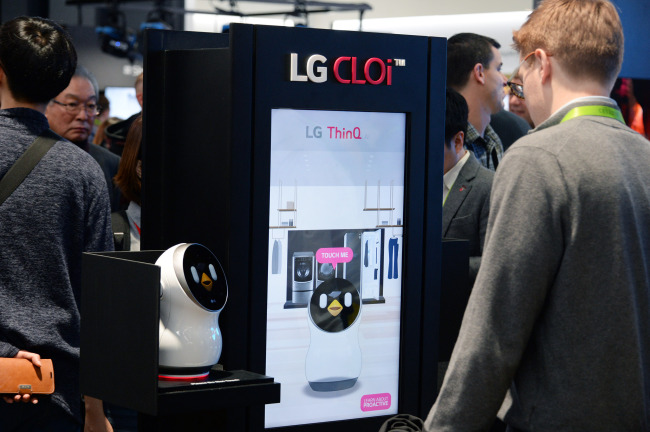 Visitors look at LG’s robot brand CLOi on Wednesday at the Consumer Electronics Show in Las Vegas. (LGE)
During the show, the firm exhibited its robot brand CLOi, which is an integrated portfolio of robots for information, cleaning and mowing lawns. It also unveiled serving, porter and shopping cart robots.

LG started to provide CLOi robots at Incheon Airport and Starfield Hanam, a large shopping mall just outside Seoul, last year. It plans to expand the use of the devices to hotels and supermarkets this year.

During the event, the tech firm also unveiled its artificial intelligence-powered TVs, the LG OLED TV ThinQ and LG Super UltraHD TV ThingQ, which allow users to control TVs and search for content via voice command by integrating LG’s AI platform DeepThinQ and Google Assistant. It also showcased OLED TVs with Alpha 9 chips that it developed, which improved the devices’ resolution.