“Conglomerate reform matters not only for the sake of economic transparency but also in the sense that it may return economic achievements to small and medium-sized firms and to the people,” the president said in his New Year’s address, the first since he took office after a snap election last year.

As ways to restrain the excessive power of chaebol owners and their family members, Moon suggested solutions such as reinforcing the voting rights of stockholders and introducing a stewardship code system in business operations.

“The intention is not to oppress or constrict corporate activities. On the contrary, I believe that this will further promote the global competitiveness of our conglomerates,” he said. 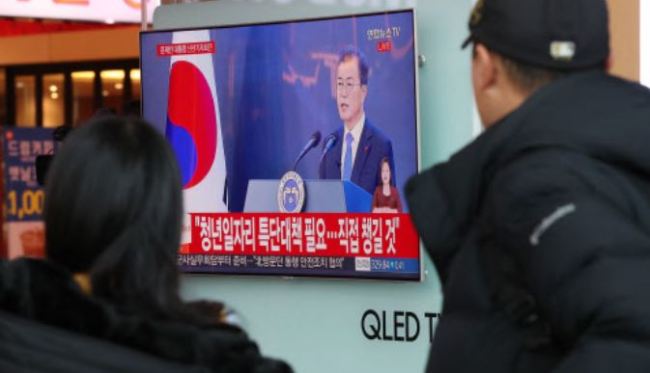 “Fair economy is the foundation for a society without privilege and a country of co-prosperity,” Moon said, referring to recruiting scandals and power abuses which raised disputes in the financial circles last year.

The state chief promised to fully support social and economic vulnerable clusters, especially those who may be affected by the recently increased minimum wage and the consequent impact on employment.

Beginning this year, the nation’s legal minimum hourly wage was raised to 7,530 won ($7) from last year’s 6,470 won, marking the steepest increase and raising concerns that it may reduce the number of jobs.

“There is the possibility that the minimum wage increase may threaten the employment rate in the vulnerable cluster,” Moon admitted, in response to a related question.

“Cheong Wa Dae has come up with countermeasures such as job funds and employment insurance, and will continue to make efforts so that these people may enjoy the benefits.”

Moon also expressed hope for the country’s 3 percent growth forecast for this year.

“We have already achieved considerable economic growth in the past. Such steep growth may not be sustainable but the 3 percent seems to be plausible,” he said.

“Our priority is to maximize our growth potentials and to narrow the gap between our capacity and the actual growth rate.”

After the news conference, business circles overall acknowledged the message by President Moon, saying the innovation-driven approach in the long run would foster the “fourth industrial revolution” in the nation, while calling for the administration to incentivize companies that create more jobs.

Lobby groups for conglomerates, meanwhile, also expressed concerns of the rapid pace of the changes that could come with possible side effects.

“The time has changed and (the conglomerates) are also well are of the social responsibilities. ... The important thing is for the government and the business circles to jointly create an atmosphere to realize what the president has mentioned,” an official of the Korea Chamber of Commerce and Industry.

“Rather than pursuing (the changes) through regulations, conglomerates will be able to become more advanced in a situation where we can voluntarily make improvements in past practices and reinforce market watches.”