In an interview with CNBC in Shanghai, the South Korean said he was "encouraged" by the high-level talks that are to take place in the border truce village of Panmunjom Tuesday. The meeting will focus on arranging North Koreans' participation in next month's Winter Olympics in PyeongChang, South Korea. But Seoul also hopes it will help lower tensions over Pyongyang's nuclear and ballistic missile programs.

"We sincerely hope that after many years of highest level of tension, this will lead to a larger and more meaningful dialogue between the South and North Korea in addressing a meaningful denuclearization of the Korean Peninsula," Ban said.

South Korea proposed the talks last week after North Korean leader Kim Jong-un said in his New Year's address that he hopes to improve ties with the South and would consider sending a delegation to the PyeongChang Games. 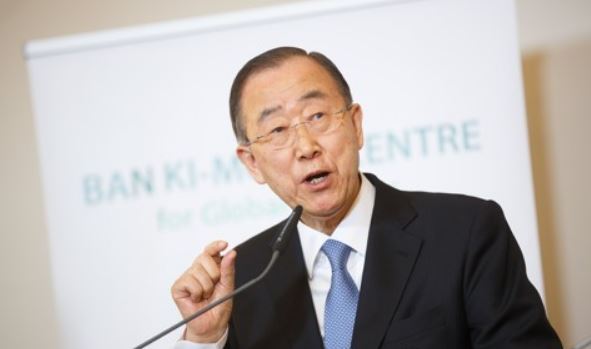 Former UN Secretary-General Ban Ki-moon (Yonhap)
It was a rare peace overture following months of provocations, including a sixth nuclear test and three tests of intercontinental ballistic missiles, that stoked fears of a war on the peninsula.

Still, critics have questioned Kim's sincerity and alleged that the North may be seeking a way out of international pressure and sanctions.

"The end goal and target of this dialogue and meetings between the parties concerned should be the denuclearization -- complete, verifiable and irreversible denuclearization of the Korean Peninsula," Ban said. "And to that purpose, this is a very good beginning, even though it may be a small one."

Ban, a former South Korean foreign minister, expressed support for US President Donald Trump's use of strong language against the North. Trump has threatened to "totally destroy" the isolated nation if necessary and boasted of having a "nuclear button" that is "much bigger and more powerful" than that of Kim.

"There is a tendency to see President Trump's remarks as very provocative rhetoric," Ban said. "But I'd like to interpret it in another way -- it is a strong word and message of international community given to North Korea."

As the "worst norm-breaker" of the international community, North Korea has defiantly challenged all UN Security Council resolutions banning its nuclear and ballistic missile activities, he noted.

"It is important that whether it is termed rhetoric or not, we must be united in sending out a united and very strong message to North Korea, so that they should realize that there is no other way for them to return to the international community as a responsible member (than by) abiding by all these basic norms and principles of United Nations Charter," he said. (Yonhap)