President Moon Jae-in on Sunday watched a popular movie about a historic pro-democracy movement in 1987, in which he himself played a leading role as a human rights lawyer.

The movie, "1987: When the Day Comes," depicts the landmark year in South Korea's struggle for democracy from the torture death of a university student to a massive protest across the country in June calling for an end to a military-backed government. 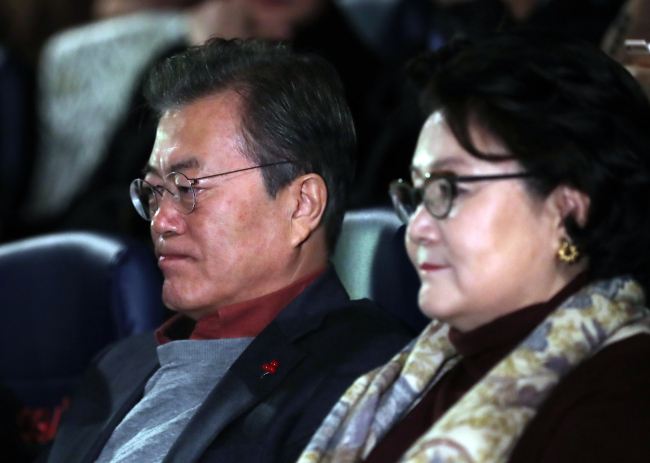 President Moon Jae-in and first lady Kim Jung-sook watch the movie “1987: When the Day Comes” at a cinema in Seoul on Sunday. The movie deals with the historic pro-democracy movement in 1987, in which Moon played a leading role as a human rights lawyer. (Yonhap)
Chun Doo-hwan, a general-turned-president, bowed to the protesters, agreeing to a constitutional revision for a direct presidential election.

After watching the film, Moon said the movie showed that though the world cannot change suddenly, it can change if citizens work together.

"I believe this movie is the answer to that question. ... The movie shows when we muster up our power, when Yeon-hee participates (in the protest), the world will change," he added, referring to a female protagonist in the film. 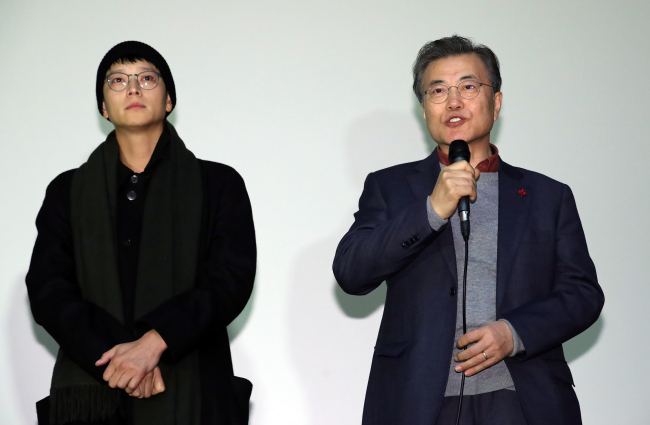 President Moon Jae-in (right) speaks to audiences after watching “1987: When the Day Comes” at a cinema in Seoul on Sunday. Standing on his left is actor Gang Dong-won. (Yonhap)
Moon also heaped praise on the movie, raising expectations that the number of viewers will reach the 10 million mark.

"I cried all throughout the movie and was touched by it," he said.

For Moon, the movie was a reminder of his grueling fight in the 1970s against dictator Park Chung-hee who ruled the country with an iron fist for 18 years. He was jailed in 1975 for joining a pro-democracy campaign.

Moon also led the June 1987 uprising in the southern city of Busan, along with the late President Roh Moo-hyun, when they were human rights lawyers. 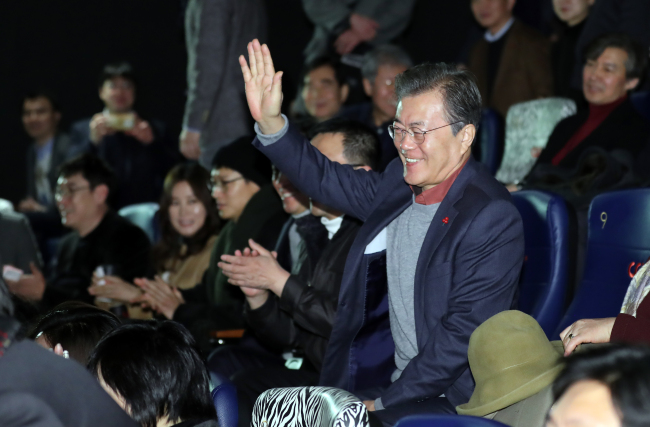 President Moon Jae-in waves at audiences at a screening of “1987: When the Day Comes” at a cinema in Seoul on Sunday. (Yonhap)
The movie premiered on Dec. 27 and had attracted more than 3.66 million viewers as of Saturday.

Moon later had a luncheon meeting with local artists that the former Park Geun-hye government allegedly blacklisted for being critical of it.

"When I heard of the blacklisting and met with those who suffered disadvantages, I always felt a sense of guilt," he said.

The liberal president pointed out that many of the victims were those who supported him during the 2012 presidential race in which Park bested him.

"I once again extend my words of solace to those who suffered from the blacklist," he said. (Yonhap)