South Korea’s consumer prices increased at the fastest rate in five years in December, on the back of strong industrial goods and financial services, government data showed Friday.

The nation’s consumer price index climbed 1.5 percent this month from a year earlier, up from the previous month’s 1.3 percent on-year gain, according to Statistics Korea. Compared to the previous month, the index moved up 0.3 percent. 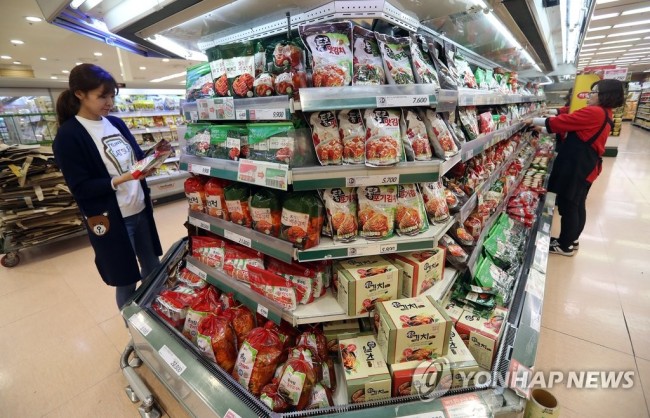 In contrast, core inflation -- which excludes volatile oil and food prices -- remained at 1.5 percent, the slowest pace in 18 years.

The general increase was largely led by the high prices of oil and related products, which offset the downturn in food product prices, the statistics office said.

This year’s annual inflation came close to the Bank of Korea’s midterm target of 2 percent for next year and the Ministry of Strategy and Finance’s forecast of 1.7 percent. The South Korean economy is projected to grow at 3 percent next year and the per capita gross national income to exceed the $30,000 mark, according to the ministry.

Meanwhile, a report by the central bank said Friday that a country with high household debt that raises key interest rates could be affected by a drop in total demand and consumption.

“We’ve found that key interest rate hikes have a great impact on the economic adjustment in a country that has a high degree of household debt,” the BOK report said.

The assessment was based on analyzing the impact of rate hikes on the economies of 28 members of the Organization of Economic Cooperation and Development between 1984 and 2015.

The report came as the central bank raised the base rate by a quarter percentage point to 1.5 percent on Dec. 1 for the first time since June 2011, citing clear signs of economic recovery and low inflation pressure.

In raising the rates, the BOK cited the need to control mounting household debt, which surpassed 1,400 trillion won ($1.3 trillion) in September.

The report, however, did not expect the latest rate hike to greatly dampen domestic consumption immediately, saying it is not clear at the moment if South Korea’s household debt should be categorized as higher than those in the surveyed economies.