[ The Korea Herald – Send E-mail ]
Political parties call on government to resolve comfort women deal
By Jo He-rim
Published : Dec 28, 2017 - 16:13
Updated : Dec 29, 2017 - 15:15
Political parties on Thursday expressed anger and called on the government to come up with a solution, as they reacted to the Foreign Ministry’s task force findings on Wednesday that revealed the former Park Geun-hye administration had deliberately kept secret parts of the 2015 agreement made with Japan on military sex slaves issue.

The task force also concluded that the 2015 deal failed to resolve the issue and did not reflect the public sentiment.

The main opposition Liberty Korea Party, however, criticized the incumbent administration, claiming it has needlessly revealed all the details of the 2015 deal as an act of “political vendetta.”

The party was formerly the ruling Saenuri Party under the Park administration, but rebranded itself after Park was removed from office over a massive corruption scandal. 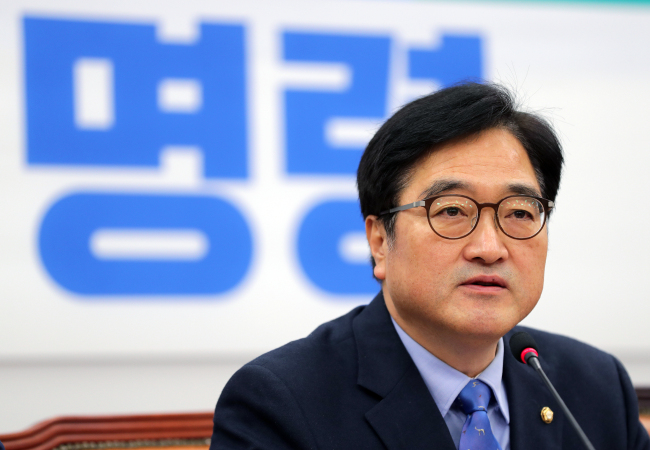 Floor leader Woo Won-shik of the ruling Democratic Party of Korea speaks at a party meeting at the National Assembly on Thursday. Yonhap
Meanwhile the ruling Democratic Party of Korea Floor Leader Woo won-shik told a party meeting, “We now know that the Park Geun-hye administration made a secret agreement and the whole process was a diplomatic disaster. We cannot hide our fury.”

“We will discuss a solution taking a victim-centered approach. We would also like to ask the Japanese government to review their stance, instead of repeating that there was nothing wrong in the process of reaching the deal.”

Rep. Woo also demanded an apology by Liberty Party Korea for praising the bilateral deal as a “historical feat which no past government has made,” at the time.

“It turns out that the Park administration kept all the sensitive parts of the agreement that goes against South Korea in the dark and met Japan’s demands,” the party’s chief policymaker Rep. Lee Yong-ho said. “Japan tried to cover up its criminal history with only 1 billion yen ($8.84 million).”

It also called for a strong measure from the government, saying the majority of citizens want an abolishment of the agreement.

The main opposition Liberty Korea Party, on the other hand, went on the offensive against the government, charging that it has not only shown a humiliating diplomatic performance, but is also using all issues for political retaliation against the former government.

“This amateur government is not only exhausting the country inside, but is making a big mistake outside,” Floor Leader Kim Sung-tae said at a party meeting.

“Amid escalating tensions on the Korean Peninsula, a strong alliance with the United States and Japan is crucial to protect the country from the nuclear threats from North Korea. The revelation is a poor move that is far removed from resolving the comfort women issue, and can lead to serious security issues,” he said in a press release on Wednesday.

He also said the government should have made clear its position and solutions to the problem first, rather than having the task force reveal unnecessary details.