As Moon goes all out to promote the games, the government is now putting the finishing touches on preparations for the country’s first Winter Olympics.

The Winter Games will kick off on Feb. 9, 2018 and run until Feb. 25, followed by the Paralympic Games from March 9-18. It will be hosted in the country’s eastern region of PyeongChang-gun, Gangneung and Jeongseon-gun in Gangwon Province.

An aerial view of PyeongChang Olympic Village / PyeongChang Organizing Committee
According to the organizing committee, 92 countries had expressed their intent to take part as of Thursday. About 2,943 athletes are expected to turn up, although other potential participants can still submit their applications before Jan. 29, 2018.

With or without North Korea, however, preparations are cruising along to the finishing line.

The torch for the Winter Games lit up the province as it arrived at Jincheon National Training Center in Jincheon on Tuesday, having toured across the country since Nov. 1. It was a symbolic move that showed the venues were ready to receive guests, top-tier athletes and fans from across the world. 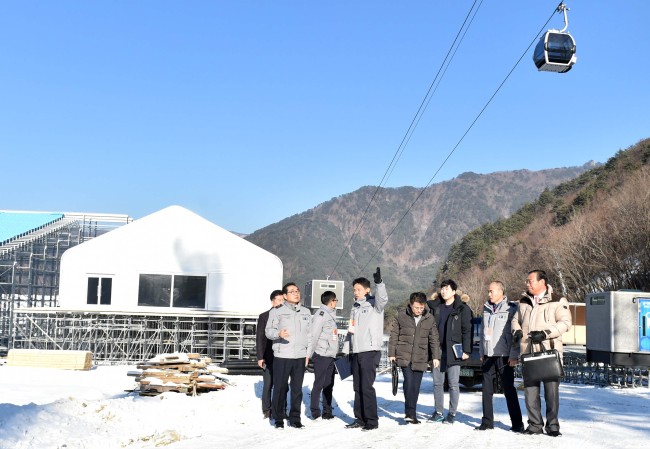 The completion of the Olympic villages, which will officially open Feb. 1, marked all of the Olympic-related facilities being finished.

Ticket sales have also seen a breakthrough. The organizing committee said that 58.5 percent of tickets for the Olympics and 23 percent for the Paralympics had been sold as of Wednesday. In October, the figures stood at 30.3 percent and 4.2 percent, respectively.

Organizers said ticket sales to Chinese visitors doubled after Moon’s visit to China, from 3,000 to about 6,000.

Among the biggest problems has been overpriced accommodations, with reports that some hotels and inns are charging as much as 1 million won ($925) a night.

Gangwon Provincial Government recently launched a call center where the public can report price gouging. The Ministry of the Interior and Safety will crack down on overcharging facilities from Tuesday through Jan. 31.

A pangovernmental safety inspection team was launched this week to check the safety of the stadiums, athletes’ living quarters, broadcasting systems, railways and other facilities related to the games.

Optimism on the horizon 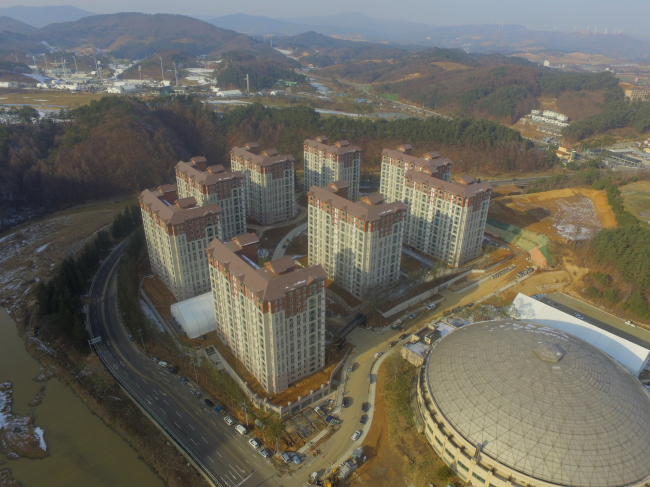 An aerial view of PyeongChang Olympic Village of Alpensia Cross-Country Center. (Yonhap)
Government officials are expressing confidence the Olympics will see profits despite initial concerns it would result in a fiscal disaster.

“When this administration launched, we expected 300 billion won of losses (after the Olympics). With more government subsidies and corporate sponsorship, I think we no longer have to worry about losing money,” said Moon. “Using facilities after the games is important. ...The government will work with the regional government and the civil society on how to utilize the facilities. ... We can turn them into centers for citizens to experience winter sports, or as practice facilities for athletes.”

Prime Minister Lee Nak-yeon said in a government meeting that the administration hopes the Winter Games will be an opportunity to promote South Korea to the world. Among the measures is allowing Chinese group tourists with Olympics tickets -- which account for nearly half of the foreign tourists to Korea -- to visit the country visa-free.

Kim Ji-yong, South Korea’s chef de mission for the Winter Olympics, vowed to give his utmost efforts in helping the national team.

“A realistic goal would be to be ranked No. 10 with six gold medals. But since this event is being hosted at home, we hope to get eight gold, four silver and eight bronze medals to finish in the top four,” he said during a press meeting in Seoul on Thursday.

South Korea finished No. 13 at the 2014 Winter Olympics in Sochi, Russia, with three gold, three silver and two bronze medals.