[ The Korea Herald – Send E-mail ]
Revised FTC guideline to force Samsung SDI to sell stake in C&T
By Cho Chung-un
Published : Dec 21, 2017 - 17:27
Updated : Dec 21, 2017 - 17:27
Korea’s antitrust watchdog said Thursday it would correct what it called an error in its guideline on conglomerates’ cross-shareholding structure, a decision that would force a Samsung affiliate to sell more of its stake in Samsung C&T Corp., the de facto holding company of the tech giant.

In December 2015, the Fair Trade Commission had set the guideline with regard to a merger between Samsung C&T and Cheil Industries, prohibiting the conglomerate from strengthening its shareholding chains by the all-stock merger in September.

Complying with the regulatory requirement, the battery-making arm of Samsung had sold 5 million shares worth $622 million that it held in its sister firm Samsung C&T Corp. at the time.

The FTC, however, said the 2015 guideline related to the law banning cross-shareholdings was wrongly applied at the time and that the affiliate should offload additional shares.

The FTC’s correction will force Samsung SDI to unload an extra 4 million shares of Samsung C&T worth 527.6 billion won ($485.4 million) based on the closing price Wednesday. The sale should be delivered no later than September, it added.

The correction of the guideline is expected to not only impose a financial burden on Samsung but also weaken the conglomerate’s de facto leader Lee Jae-yong’s control over the group, industry watchers said.

Apologizing for the 2015 error by his organization, FTC Chairman Kim Sang-jo said the decision was made to prevent confusion and remove unnecessary concerns in the market. Samsung has a right to bring the case to the court, and it would be up to the court’s decision, he said.

“Samsung can file a lawsuit that its trust (on fair market principle) was violated. That is Samsung’s right guaranteed by the Constitution and the court will be responsible for making that final judgment.” 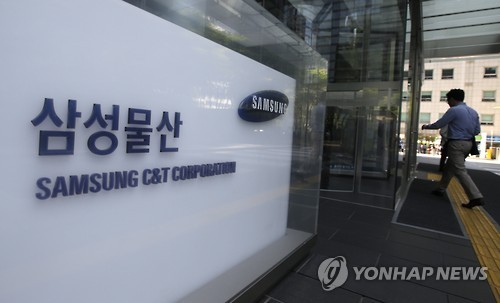 (Yonhap)
Critics say that the decision was made based on a court’s latest ruling on Samsung Electronics Vice Chairman Lee Jae-yong that he was involved in Samsung’s request to the presidential office to lift regulatory hurdles on the controversial merger between the two affiliate.

Lee is in his second trial. But even if the court rejects the lower court’s decision and finds Lee not guilty in the case, the FTC’s revision on its guideline on the Samsung merger case would not be affected, Kim said.