INCHEON -- South Korea might have lost all three games at a pre-Olympic men's hockey tournament last week, but head coach Jim Paek said Tuesday not all was lost for his charge.

Paek and his charge returned home from Moscow, where they played and lost all three matches at the Channel One Cup. It was the final tournament for South Korea before the 2018 PyeongChang Winter Olympics, which will be the country's first appearance at the quadrennial event.

But Paek, a former National Hockey League defenseman, said experiencing competition against the top countries was the most important takeway from Russia. South Korea had never before faced Canada, Finland and Sweden. 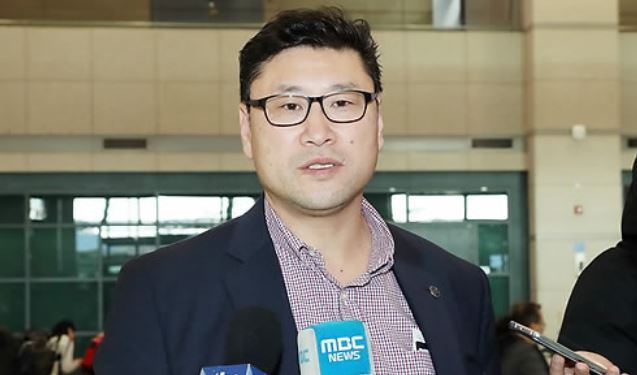 South Korea men`s national hockey coach Jim Paek speaks to reporters at Incheon International Airport on Dec. 19, 2017, after arriving from the Channel One Cup tournament in Moscow. (Yonhap)
"Experience is the most important thing," he told reporters at Incheon International Airport. "The only way we're going to get better is to challenge ourselves. We were challenged and now we can get better."

In these losses, South Korea was outshot by 156 to 42. Only the brilliance of starting goalie Matt Dalton kept the scores respectable, and Paek said he'd like to see fewer shots by his opponents in the future.

"As we moved on into the tournament, the players were slowly adapting," the coach said. "It's not an instant thing. Hopefully, it doesn't take years. I think it was a great starting point for us."

South Korea went 0-for-12 in power plays in three games, and struggled mightily in the face-off circles. South Korea won just 11 out of 50 draws against Canada, nine out of 44 against Finland and 11 out of 54 versus Sweden.

Paek blamed the trouble with the draws on a new set of face-off rules, which he said was thrown at the team just before the start of the first game against Canada.

As for power plays, Paek said it will just take hard work.

"As you move up in levels, it's not easy anymore," he said. "You can have the best power play in the world but other penalty killers are working very hard. The great thing here is it's a learning experience for us. And we can pick that apart as a coaching staff and figure it out."

There were some bright spots for South Korea.

South Korea held a lead in all three games, thanks to the top forward line of Kim Ki-sung, Kim Sang-wook and Mike Testwuide. In fact, the two Kims, who are brothers, and Testwuide, a naturalized Colorado native, were the only South Koreans to register a point.

Kim Ki-sung had a goal and three assists, while his younger brother, Sang-wook, had two goals and a helper. Testwuide scored one and set up another.

Naturalized goalie Matt Dalton stood on his head in all three games and proved why he may just be the most valuable player on the team.

The Canadian-born netminder faced 155 shots in total and stopped 143 of them, with the last Canadian goal being an empty-netter in the dying seconds.

At the Olympics, South Korea will face Canada, the Czech Republic (No. 6) and Switzerland (No. 7) in the group stage.

Paek said his team still has to "fine-tune our structure and systems" and play better as a team, but his objective at the Olympics remains unchanged.