With South Korea gearing up for its first Winter Olympic Games, the arrival of the Olympic flame topped the list of the country's most memorable sports news stories of 2017, as compiled by Yonhap News Agency on Monday.

Joining the PyeongChang Winter Games' torch relay at the top was South Korea's qualification for the 2018 FIFA World Cup in Russia.

In a survey of 58 South Korean newspapers and broadcasters from Dec. 6 to 12, those two stories each earned 388 points to share first place. 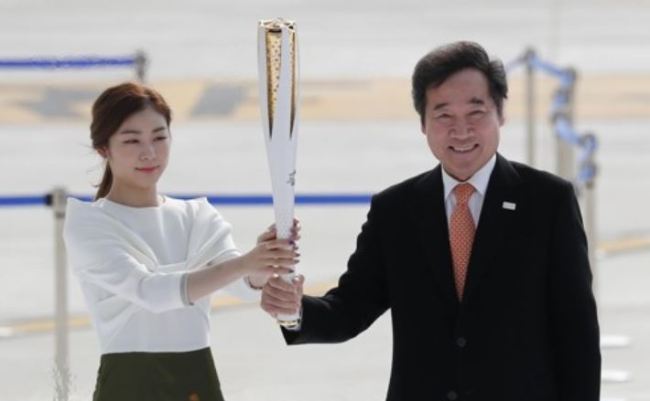 In this file photo taken on Nov. 1, 2017, former Olympic figure skating gold medalist Kim Yu-na (L) and South Korean Prime Minister Lee Nak-yon hold the torch for the 2018 PyeongChang Winter Olympics during the ceremony marking the arrival of the Olympic flame at Incheon International Airport. (Yonhap)
A first-place vote was worth 10 points, with a second-place vote good for nine points, and so forth.

The Olympic flame was lit in Greece, the birthplace of the modern Olympic Games, and arrived in South Korea on Nov. 1, when the countdown to PyeongChang 2018 reached 100 days. South Korea welcomed the Olympic flame for the first time since 1988, when Seoul hosted the Summer Games later that year.

PyeongChang, some 180 kilometers east of the capital, is the host of the first Winter Olympics in the country.

PyeongChang won its Winter Games bid in its third try. In an International Olympic Committee vote, it lost to Vancouver for the 2010 Olympics and then fell to Sochi for the 2014 competition. Then at the IOC Session in Durban, South Africa, in July 2011, PyeongChang edged out Munich of Germany and Annecy of France.

PyeongChang would encounter a few bumps in the ensuing years, but facilities and infrastructure are now firmly in place, ready to welcome thousands of athletes and spectators from around the world.

The torch relay, now well underway, will cover 2,018 kilometers across the nation, a nod to the year in which the competition is taking place, and the Olympic cauldron will be lit during the opening ceremony at PyeongChang Olympic Stadium on Feb. 9. The quadrennial event will wrap on Feb. 25.

PyeongChang 2018 will offer a record 102 gold medals across seven sports and 15 disciplines.

South Korea's qualification for their ninth consecutive FIFA World Cup was the co-top sports story of the year. The Taeguk Warriors never made things easy on themselves, as they finished second in Group A -- the last automatic qualifying berth from the group -- at 15 points from 10 matches, just two better than Syria. 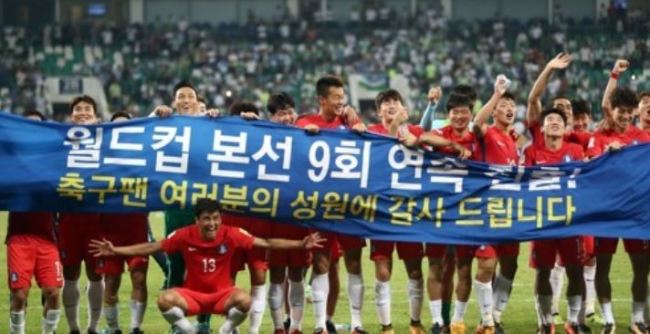 In this file photo taken on Sept. 5, 2017, South Korean men`s national football players celebrate qualifying for the 2018 FIFA World Cup after a 0-0 draw against Uzbekistan in the last Asian World Cup qualifying match at Bunyodkor Stadium in Tashkent, Uzbekistan. (Yonhap)
South Korea, ranked 59th, will face the defending World Cup champions and world No. 1 Germany in Group F action next June, along with Mexico and Sweden, a pair of other top-20 countries.

In golf, South Koreans dominated the LPGA Tour once again, but none had quite the season that rookie sensation Park Sung-hyun enjoyed in 2017.

The 24-year-old became the first rookie in 39 years to sweep up Player of the Year, Rookie of the Year and the money title in the same season. Park also briefly reached No. 1 in the world rankings in November, becoming the first rookie to reach that plateau.

A former Korea LPGA Tour star, Park stunned the golf world with her maiden major victory at the US Women's Open in July, and later captured the Canadian Pacific Women's Open in August. 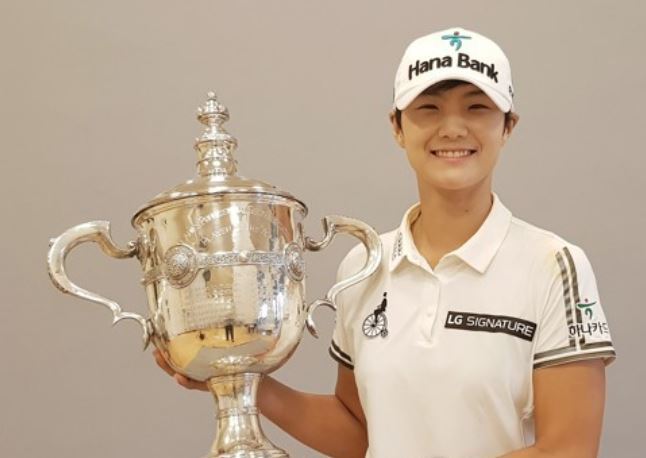 In this file photo provided by SEMA Sports Marketing on Nov. 20, 2017, Park Sung-hyun of South Korea holds the trophy for the LPGA Tour`s Player of the Year honors after the season-ending CME Group Tour Championship in Naples, Florida. (Yonhap)
Park clinched the Rookie of the Year points race with five tournaments remaining, and became the co-winner of the Player of the Year award with fellow South Korean Ryu So-yeon. With a little over $2.3 million, Park was the only LPGA player to make more than $2 million in 2017.

The Kia Tigers' first Korea Baseball Organization championship in nine years ranked fourth on Yonhap's list. They won both the regular season pennant and the Korean Series. In the championship finals, the Tigers defeated the Doosan Bears, two-time defending champions, in five games.

In the process, the Tigers' left-handed ace Yang Hyeon-jong was voted the Korean Series MVP, thanks to a complete game shutout victory in Game 2 and a save in the clinching Game 5. Yang later was named the regular season MVP and captured the Golden Glove for pitcher, becoming the first KBO player to win all three major individual awards in one season.

With Yang emerging as a star, the KBO bid adieu to its greatest slugger, Lee Seung-yuop of the Samsung Lions, whose retirement came in fifth place on the sports news list.

The 41-year-old wrapped up his 23-year professional career this year, but he didn't just play out the string or limp to the finish line. Lee homered in each of his first two at-bats in his final KBO game on Oct. 3, bringing his lifetime total to 467 home runs, already tops in the KBO's career list by a wide margin.

Lee also went on the KBO's first farewell tour throughout the season. At each of his final road stops, home teams presented Lee with commemorative gifts and held pre-game celebrations to send off one of the league's biggest legends.

Coming in at No. 6 was Tottenham Hotspur attacker Son Heung-min's scoring prowess. In May, Son scored his 21st goal in all competitions of the 2016-2017 season to become the top South Korean scorer in a single European season, surpassing the mark held by Cha Bum-kun for Leverkusen during the 1985-1986 season.

Then in November, in the early part of the 2017-2018 season, Son netted his 20th career Premier League goal to become the top Asian scorer of all-time in the competition. Son usurped another South Korean legend, former Manchester United midfielder Park Ji-sung.

At No. 7 was sprinter Kim Kuk-young breaking his own national record in the men's 100-meter dash with 10.07 seconds. He did so at a domestic competition on June 27, only two days after setting a then-record with 10.13 seconds on the same track in Jeongseon, some 210 kilometers east of Seoul.

Another story related to the men's national football team ranked eighth. As South Korea struggled to handle underdogs like Syria, China and Qatar during the final World Cup qualification round, calls for coach Uli Stielike's head increased. He was sacked in favor of his former assistant, Shin Tae-yong, in July, with two qualifying matches remaining, but that wasn't the end of the story.

Shin coached South Korea to consecutive scoreless draws against Iran and Uzbekistan to close out the qualifying round, as his team squeezed into the World Cup. Then an unexpected bit of controversy emerged with former national team boss Guus Hiddink's reported interest in returning as South Korea coach.

Kim Ho-gon, technical director for the Korea Football Association, denied early media reports that a Hiddink aide in Seoul expressed an interest on the Dutchman's behalf. When the aide revealed a text message sent to Kim showing Hiddink's stated interest, the situation degenerated into a petty war of words.

Hiddink, still a national hero for guiding South Korea to the semifinals at the 2002 World Cup, put an end to it all. After meeting with KFA brass in October, Hiddink said he wouldn't be able to take any full-time position with South Korea during the 2018 World Cup because of prior commitments, but he'd still be willing to assist the team in some capacity.

Coming in at No. 9 was the closure of the National Training Center in northern Seoul. Opened in 1966 as the training base for the nation's Olympic athletes, it was better colloquially as the "Taereung Training Center," for its location between Taereung, the tomb of Queen Munjeong, and Gangneung, the tomb of King Myeongjong and his consort Queen Insun.

Athletes are now training in spanking new facilities at the Jincheon National Training Center in Jincheon, some 90 kilometers south of Seoul. The new training base is three times larger than the Taereung center, able to accommodate 1,150 athletes in 35 sports at once, compared to 450 athletes in 12 sports in Seoul.

Rounding out the top 10 was tennis player Chung Hyeon's first career win on the ATP Tour.

The 21-year-old won the inaugural Next Generation ATP Finals in Milan, Italy, in November. By defeating Andrey Rublev of Russia in the final, Chung became the first South Korean to win an ATP Tour singles title since Lee Hyung-taik in January 2003.

The Next Generation ATP Finals was the season-ending event for players 21 or younger, and the victory cemented Chung's reputation as one of the game's bright young stars. (Yonhap)