South Korea dropped to Sweden 5-1 to close out a pre-Olympic men's hockey tournament in Moscow on Saturday.

South Korea, ranked 21st in the world, lost all three games it played at the Channel One Cup at VTB Ice Palace in the Russian capital. World No. 3 Sweden gave South Korea all it could handle, scoring five unanswered goals after giving up the opening goal in the second period.

Earlier in the week, South Korea lost to Canada 4-2 and Finland 4-1.

Goalie Matt Dalton, with 106 saves in the first two games, made 48 more on Saturday in another strong game, though he alone couldn't save the team from defeat. 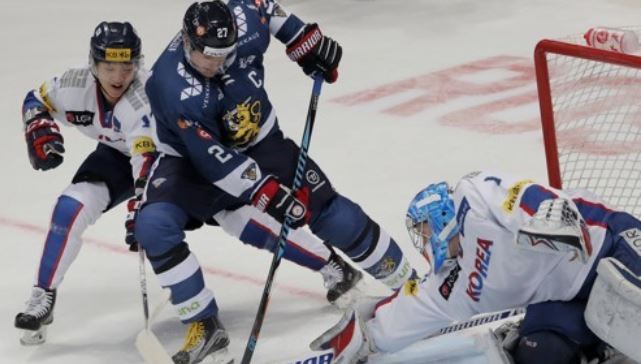 Petri Kontiola of Finland (C) takes a shot on South Korean goalie Matt Dalton (R) during the first period of the teams` Channel One Cup game at VTB Ice Palace in Moscow on Dec. 15, 2017. (Yonhap)
This is the last international tournament for South Korea before next February's PyeongChang Winter Olympics. Coached by former National Hockey League defenseman Jim Paek, South Korea will play a couple of home-and-home tune-up games against Russia early next year.

In its Winter Games debut at PyeongChang 2018, South Korea will face Canada, Switzerland and the Czech Republic in Group A.

Then South Korea opened the scoring just 42 seconds into the second period, thanks to some strong forecheck by the top line of Kim Ki-sung, Kim Sang-wook and Michael Testwuide.

Testwuide stole the puck behind the Swedish net and set up Kim Ki-sung for a shot. Goalie Viktor Fasth made an initial save, but the rebound went to wide-open Testwuide, who buried it home for his first goal of the tournament.

Sweden then started pushing back and tied the score at the 3:39 mark in the period. Sweden had an extra attacker on the ice with a delayed penalty against South Korea, and Linus Omark found Alexander Bergstrom all alone at the top of the crease for an easy goal past Dalton.

Sweden turned it up a notch on the offensive end, highlighted by crisp entries into the attacking zone that generated one dangerous chance after another.

Then at 5:11, Anton Lander scored on a pretty rush to put Sweden up 2-1, converting a nifty backhand drop pass by Mikael Wikstrand that fooled everyone but the goal scorer.

It became 3-1 Sweden with Par Lindholm's goal, set up by Joakim Lindstrom, at 10:38 in the frame.

Sweden put the game further out of reach with a shorthanded goal by Dennis Everberg at 9:07 in the third period. Sweden caught South Korea on a terrible line change, and Patrik Zackrisson secured the puck deep in the South Korean zone before feeding Everberg for a shot that squeezed past Dalton for a 4-1 Sweden lead.

Sweden added a power play marker by Andreas Engqvist for good measure at 16:24 in the third, and cruised to an easy victory.

South Korea opened the scoring for the second straight game and held a lead at one point in all three contests at the tournament. But other than the top line, offense was hard to come by for South Korea.