Samsung Electronics' latest product is a follow-up to a pen-equipped laptop, the Notebook 9 Pen, that was released earlier this year.

Bringing its S Pen technology to the company's notebook lineup, the new model will include Intel's latest eighth generation processor, the company said. 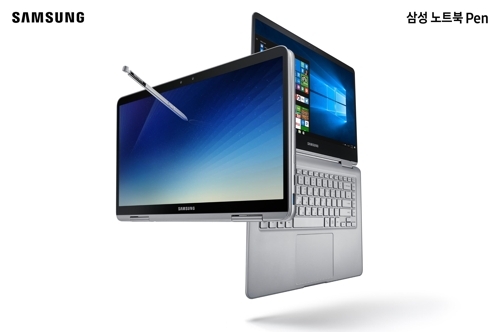 Like the previous Notebook 9 series, the model has a 360-degree hinge with a touch screen and includes Samsung's Air Command software for drawing, taking notes and editing documents, the company said.

LG Electronics' latest ultra-slim laptop, the "LG Gram," will also be launched next January with improved functionality, the company said.

With Intel's latest eighth-generation processor, the 2018 edition will offer up to a 40 percent speed boost over the previous seventh-generation chips.

Despite the ultra-slim design, the laptop features higher performance and a stronger body using materials that could pass military standards tests by the American army.

The model weighs 965 grams and will be priced between 1.45 million and 2.22 million won, the company said. (Yonhap)