[ The Korea Herald – Send E-mail ]
SK-Sinopec JV highlighted amid Moon‘s visit to China
By Shim Woo-hyun
Published : Dec 14, 2017 - 18:04
Updated : Dec 14, 2017 - 18:19
Wuhan Petrochemical, the SK-Sinopec joint venture, has been highlighted as a successful case of a cooperative project between the two countries during President Moon Jae-in’s state visit to China this week.

The Korea-China petrochemical joint venture was forged by SK Global Chemical and Sinopec, China‘s largest petrochemical firm in 2013 with the two investing 3.3 trillion won ($2.91 billion) with the ratio of 35 percent to 65 percent, largely backed by SK Group Chairman Chey Tae-won’s vision to expand its footings in the Chinese market. 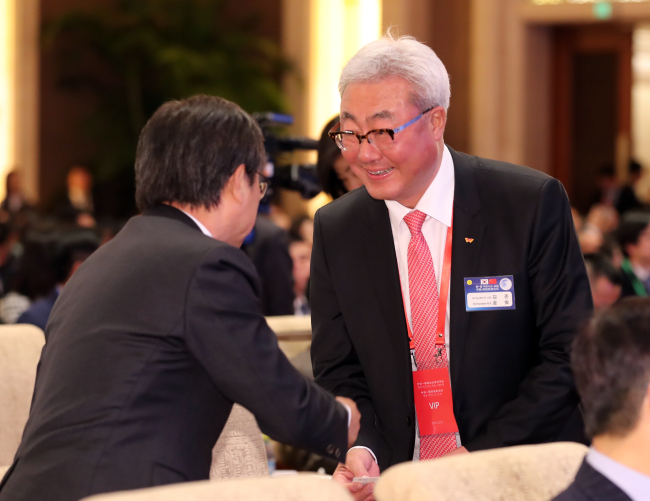 SK Innovation CEO Kim Jun (right) shakes hands with participants during the Korea-China business forum held in Beijing, China, Wedensday. (Yonhap)
The JV has been introduced during a forum held in Beijing on Wednesday, a day ahead of the bilateral summit between President Moon Jae-in and his Chinese counterpart Xi Jinping. Leaders and high-ranking officials of both Korean and Chinese conglomerates took part to discuss economic cooperation for the next 25 years, the company added.

In October this year, the Sinopec-SK Wuhan Petrochemical joint venture also decided to invest 740 billion won to increase the production capacity to 3 million tons a year by 2020.

They have already logged a pretax profit of some 530 billion won as of the third quarter this year, according the company’s statement. The company is expected to post more than 600 million won in surplus, according to the industry sources.