It was the first one-on-one meeting between the top economy policymaker and a conglomerate leader.

The meeting was held Friday at the request of Park Yong-maan, chairman of the Korea Chamber of Commerce and Industry, who asked the deputy prime minister for economy to better communicate with industry leaders in order to address economic issues such as the government’s regulations on new industries and youth unemployment problems. 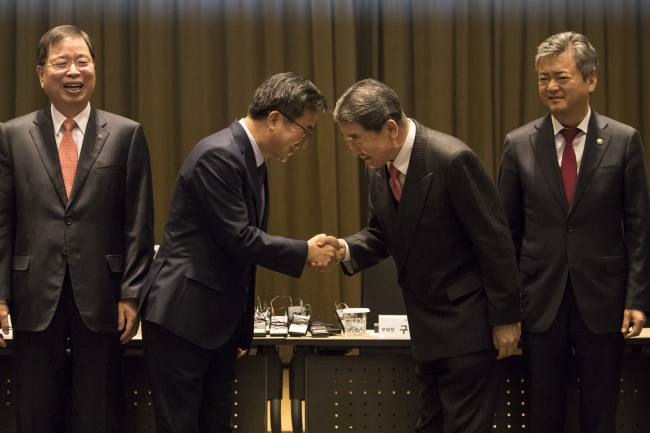 At an hourlong closed-door meeting, LG unveiled its plan to invest a total of 19 trillion won next year, up 8 percent from this year, as part of its preparations for future businesses.

More than 50 percent of the new investments will be allotted for electric vehicle parts, autonomous driving sensors, organic light-emitting diode displays, camera modules and biomedicine, which LG will focus as areas of innovative growth.

The company will expand workforce for research and development of these areas by employing about 10,000 new workers.

“It is difficult to survive if we fail to achieve innovation that creates differentiated values,” said LG Group Vice Chairman Koo Bon-joon in a speech prior to the meeting. “LG will focus resources and capabilities to the areas of innovative growth in order to contribute to the country’s economic growth.”

Putting emphasis on innovative growth as one of key pillars of the Moon Jae-in government’s economic policies, Kim called on private businesses, regardless of small or large, to make efforts for such growth.

As for the reason the finance minister chose LG to meet with as the first over others, Kim cited that LG has contributed to fostering science, a crucial pillar for the innovative growth the government aims to achieve.

“Above all, the most important issue is job creation,” Kim said. “We are hoping to talk with LG officials about investments in new businesses that would contribute to creating new jobs.”

Kim also highlighted co-prosperity between small and large businesses and a fair competition in the market.

LG pledged to provide 858.1 billion won in zero- or low-interest rate loans for its contractors next year.