[ The Korea Herald – Send E-mail ]
US safeguard against Samsung, LG to halve washer imports: panel
By Cho Chung-un
Published : Dec 11, 2017 - 17:48
Updated : Dec 11, 2017 - 17:48
If a US safeguard is implemented on products manufactured by South Korean appliance makers, the number of washing machines imported to the country is expected to half, according to a report compiled by a US trade watchdog.

In the final report on its Section 201 investigation to US President Donald Trump last week, the US International Trade Commission stated that a broad tariff will increase the retail prices of large residential washers (LRW) sold in the US market compared to 2016 while benefitting the US industry in terms of sales, revenue and profits. 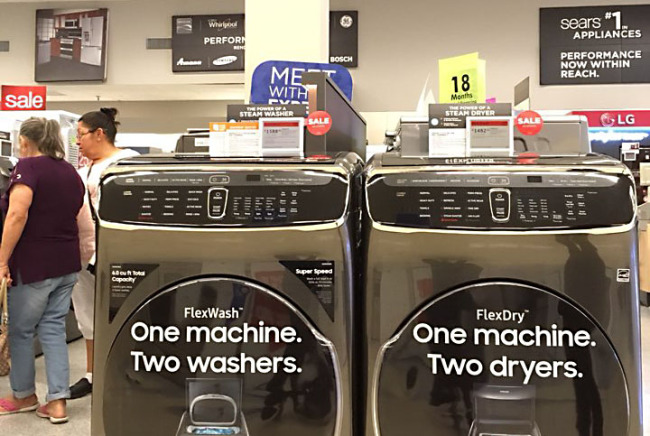 Samsung and LG washers displayed at a mart in Los Angeles (Yonhap)
“Under our recommended remedy of a 50 percent tariff ad valorem on imports over 1.2 million units, the economic model predicts that import volume would decline by over half and import prices would increase by almost a third relative to 2016 levels,” the ITC stated in the report.

The report which contains the watchdog’s final recommendations, was made public last Wednesday, local time, after being sent to the White House two days earlier.

But the report also suggested that the safeguard would not disrupt two South Korean firms’ plans to build plants in the US.

“At the same time, our recommended action would do little to hinder LG’s and Samsung’s plans to construct new LRW production facilities in the United States in the short term,” it said. “As already discussed, our recommended TRQ on imports of LRWs will permit LG and Samsung to maintain a presence in the US market sufficient to support the ramping up of their planned US plants.”

The panel said, based on its study, that the 1.2 million quota will increase retail prices of washers by one third due to a decrease in imports.

The recommendation came after months of investigations into washers manufactured by Samsung and LG. The probe began after a petition filed by US companies including Whirlpool and GE, urging the administration to impose a 50 percent tariff on all imported washers to the US.

LG and Samsung proposed to raise the in-quota level at 1.45 million units but was rejected by the US panel.

“The in-quota volume level proposed by LG and Samsung, 1.45 million units, is around half the peak level of import volume in 2016, when the domestic industry’s operating losses also peaked,” the panel said.

The panel also declined to take Samsung and LG’s proposal not to impose import restriction on covered parts. The ITC has suggested a separate tariff rate quota with an in-quota volume level of 50,000 units.

Samsung and LG, however, kept their stance that they regret such recommendations and that it would eventually lead to an increase in product price and limit consumer choices.

President Trump has to decide whether to take the recommendation within 60 days. The White House is reportedly waiting for another recommendation by US Trade Representatives likely to be delivered around mid-January, according to watchers.