South Korea's top negotiator on defense cost sharing talks with the United States said Thursday that he will do his best to produce an outcome that will be a "win-win" for the two allies.

Chang Won-sam, who was appointed to the post in mid-November, said that the negotiations between Seoul and Washington should be understood as a process of improving "efficiency" in bilateral alliance.

"This can be said to be negotiations, as money comes and goes, but I think that they should be thought of as a process of improving efficiency in the South Korea-US alliance in a way that would be a win-win outcome," Chang told a group of reporters. 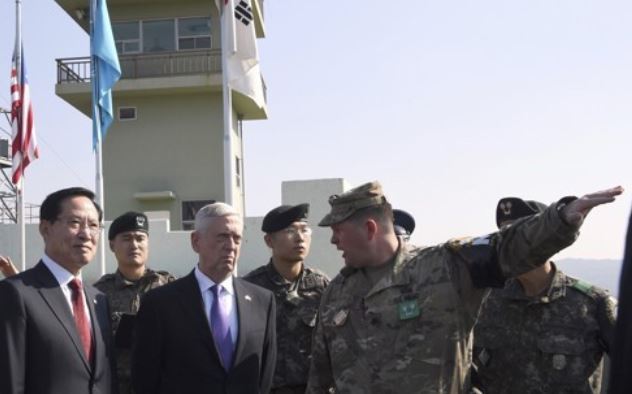 South Korean Defense Minister Song Young-moo (L) and U.S. Defense Secretary James Mattis (C) visit Observation Post Ouellette in the Demilitarized Zone (DMZ) on the border between North and South Korea on Friday, Oct. 27, 2017. (Joint Press Corps-Yonhap)
"I will do my best to produce a win-win outcome by closely communicating not only with the US but also with (relevant people) domestically," he added.

Asked when the negotiations will begin, Chang said it will be hard to start within this year but he is pushing to launch it "as soon as possible."

Chang, former ambassador to Sri Lanka, is leading a task force earlier launched by the foreign ministry which, along with the defense ministry, will join the talks aimed at renewing the current cost sharing deal for about 30,000 US troops stationed in South Korea.

South Korea is currently paying a part of the cost that the US should shoulder by renewing the bilateral Special Measure Agreement every five years.

The cost-sharing talks are drawing keen attention as US President Donald Trump has called on South Korea to pay more to maintain US troops on the Korean Peninsula.

Earlier, the US also named its own top negotiator, gearing up for the talks with South Korea that observers expect to start early next year. (Yonhap)