The Presidential Committee on Northern Economic Cooperation unveiled its plan in its inaugural meeting hosted by chairman Song Young-gil, attended by ministers of finance, foreign affairs, unification, trade and other related organizations.

The committee was created under President Moon Jae-in's "New Northern Policy," which aims to set up a vast economic region that would encompass the Korean Peninsula and the Russian Far East to Northeast Asia and Eurasia.

The key point of the new vision is aimed at building a Eurasian economic community through cooperation between South Korea and Russia.

Joint projects include the connection of a cross-border inter-Korean railway with the Trans-Siberian Railway, as well as the establishment of a power grid that connects Russia with the Northeast Asian electricity network involving South Korea, China and Japan. 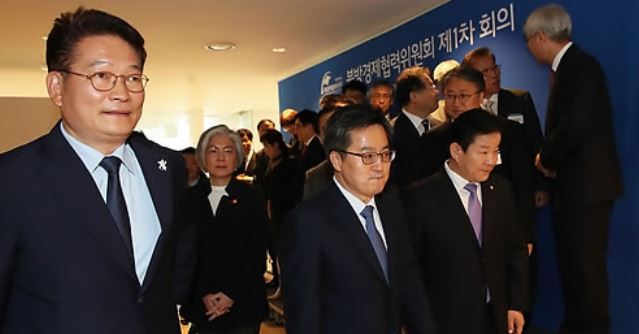 Song Young-gil (L), the head of the Presidential Committee on Northern Economic Cooperation, attends a first meeting held in Seoul on Dec. 7, 2017. (Yonhap)
"We will first come up with measures to connect Russia with the Northeast Asia super grid and Siberian silk road," Song, a ruling Democratic Party lawmaker, said during the meeting. "The committee will cooperate with related ministries to attain tangible gains in promising projects."

For the ambitious vision, North Korea's participation is essential as projects based on inland infrastructure that connects South Korea and Russia would have to go through the reclusive country.

While Pyongyang's joining in the initiative is not a feasible goal for now amid heightened military tension, the committee said it ultimately hopes its involvement when the conditions are met in the future.

"As North Korea is currently under international sanctions, we will focus on making progress in joint projects with Russia and other countries for now," Lee Tae-ho, the presidential secretary for trade, said in a briefing. "If we make progress in other projects, North Korea may express interests in the projects. The final vision of the new economic territory would need North Korea's involvement."

Previous governments have pushed for cross-border projects with Russia, including a natural gas pipeline linking Russia's Far East and the eastern coast of the Korean Peninsula and developing industrial complexes on the North Korean border with Russia.

However, strained ties with Pyongyang have hampered diplomatic efforts to push for the trilateral projects.

South Korea exported $5.1 billion worth of goods to Russia in 2016, mainly in vehicles, auto parts and heavy equipment, according to the Korea Trade-Investment Promotion Agency.

To support corporate investment, the committee launched a consultative body with local companies that operate businesses in Russia or have plans to enter the market.

The state-run KEPCO is pushing to link the electricity network between South Korea and Russia via a cable along the seabed as part of its "Northeast Asian super grid" project involving China and Japan.

South Korea and Russia have also agreed to jointly build a seafood processing complex in the Russian Far East, and talks are under way to modernize the Zvezda shipyard in the region.

During the meeting, the state-run Korea Export-Import Bank introduced a financial program that supports $2 billion for investment projects in Russia's Far East in the next three years.

The Russian Far East covers 36 percent of the country's territory but has less than 5 percent of its population. About 65 percent of all Russian marine products come from this region, despite it having generally poor infrastructure. (Yonhap)