Former Finance Minister Choi Kyung-hwan showed up at the prosecutors' office Wednesday to be questioned over bribery allegations.

Prosecutors are to interrogate Choi, currently a lawmaker of the main opposition Liberty Korea Party, over allegations that he took 100 million won ($92,000) from the National Intelligence Service when he was finance minister under the Park Geun-hye administration in 2014.

The prosecution believes the money was paid to lobby him for retaining the spy agency's off-book funds when then-opposition parties pushed to scale them down on the basis of their untraceable nature. 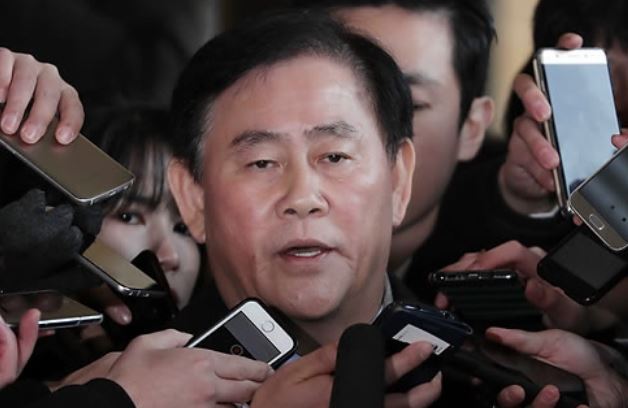 Rep. Choi Kyung-hwan of the main opposition Liberty Korea Party answers questions from reporters as he appears for questioning over bribery allegations involving the state spy agency on Dec. 6, 2017. (Yonhap)
"I am sorry for causing concern to the public," he told reporters after appearing at the Seoul Central District Prosecutors' Office at around 10 a.m. "I will earnestly explain to the prosecution regarding the false accusations."

The four-term conservative lawmaker has pushed back his attendance for questioning three times. He refused the first summons late last month questioning the fairness of the probe and then asked the prosecution to reschedule the interrogation, citing his parliamentary activities and other reasons. (Yonhap)