South Korea asked for continued efforts by the Philippines on Tuesday to protect its people in the Southeast Asian country from crime, the foreign ministry said Tuesday.

Earlier, consular officials of the two met in Manila and discussed a variety of issues ranging from consular cooperation to protection of their people traveling or living in the other country.

In response to the request, the Filipino side promised to provide necessary support to better protect Koreans there. 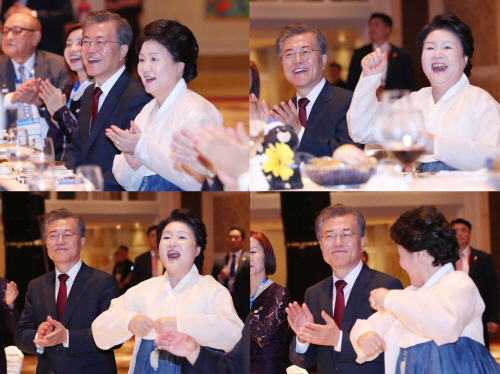 Korean President Moon Jae-in and his wife met with Koreans living in the Philippines, through an event held at the Makati Shangri-La in Manila on Nov. 15 (Yonhap)

They also agreed to continue cooperation in preventing crimes for Koreans, strictly cracking down on serious crimes, holding those involved accountable and providing support for victims.

Meanwhile, the Filipino officials requested active support for some 18,000 Filipino women who immigrated here to marry Korean men to better settle down by getting over challenges from language and cultural differences. (Yonhap)