[ The Korea Herald – Send E-mail ]
US reiterates denuclearization as precondition for talks with NK
By Jung Min-kyung
Published : Dec 4, 2017 - 16:30
Updated : Dec 4, 2017 - 16:30
The United States reiterated denuclearization as a precondition for talks with North Korea in response to Pyongyang’s request that Washington must recognize it as a nuclear weapons state to start dialogue. 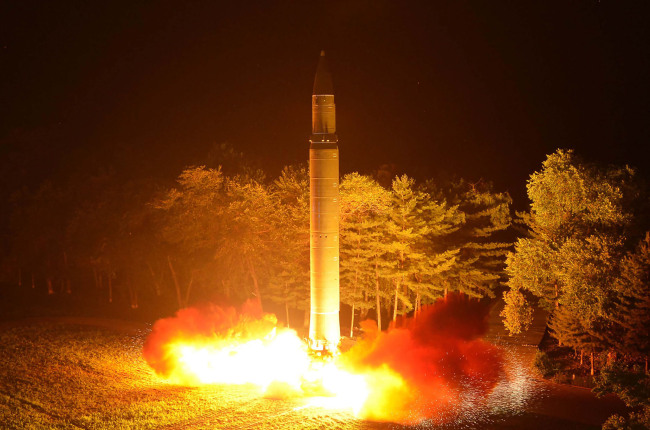 North Korea test-fires its new "Hwasong-15" missile on Nov. 29. (Yonhap)
“It is not enough for (North Korea) to stop its program where it is today,” US State Department spokesperson Katina Adams told Voice of America on Monday.

“We do not see any signs that North Korea is willing or interested to engage in credible talks on denuclearization at this stage. North Korea must be prepared to come to the table ready to chart a course to cease and roll back its nuclear weapons program,” she said.

Adams’ remarks address a series of recent Russian media reports claiming Pyongyang is ready to resume talks with the US on security issues -- with strings attached.

“We met with Kim Yong-nam, president of the Presidium of the Supreme People’s Assembly of North Korea,” Vitaly Pashin, a member of the Russian legislature told state-run media Interfax. Pashin was part of a delegation of Russian legislators that were dispatched to the North on Nov. 27, according to media reports.

“He said North Korea is ready to sit down at the negotiating table,” he said, adding that Pyongyang also stressed the US must recognize the reclusive state as a nuclear power to conduct negotiations.

In 2003, North Korea officially withdrew from the Nuclear Nonproliferation Treaty, which defines nuclear weapon states and promotes peaceful use of nuclear energy, on US allegations it had launched an illegal enriched uranium weapons program.

Pyongyang has often said the goal of its weapons program was to achieve a “balance of power” with the US. Last month, its state-run newspaper Rodong Sinmin said Pyongyang may consider abandoning its decadeslong nuclear drive if the US gives up its nuclear weapons first.

In a separate interview with another Russian media outlet Tass, Pashin said the North also wants Russia to be a key participant at the negotiating table between Pyongyang and Washington.

“North Korea is currently ready to conduct negotiations with the US with the participation of Russia as a third party,” he said.

According to Pashin, the North Korean leadership said its country is regularly exposed to “external aggression on the part of the US” and were forced to test-fire its latest missile, which demonstrated “ability to strike at any territory of America.”

“(North Korea’s missile test on Nov. 29) is the first missile launch since the last one carried out by North Korea on Sept. 15. Since then, Pyongyang had refrained from military provocations for 75 days awaiting reciprocal steps from the US, which, instead of meeting (North Korea) halfway, announced large-scale surprise military drills,” he added.

South Korea and the US kicked-off a five-day joint air force drill Monday involving more than 230 aircraft and around 12,000 personnel, mere days after the North’s latest missile test. North Korea views the regular exercises as a dress rehearsal for invasion, although the allies insist they are defensive in nature.

On Wednesday, Pyongyang launched what experts saw as a new type of intercontinental ballistic missile, which reached an altitude of about 4,475 kilometers and flew 950 kilometers for 53 minutes. It is thought to be capable of striking the US mainland if launched at a standard trajectory.

During North Korea’s 75-day lull in military provocations, the US hinted at its willingness to establish a solid dialogue channel with the North, with US Secretary of State Rex Tillerson claiming it holds multiple communication lines with the communist country.

Meanwhile, a Unification Ministry official here highlighted the need for an upgrade in the South Korean government’s approach toward striking negotiations with North Korea.

“North Korea’s nuclear capability has become more advanced since the Sept. 19 joint statement was signed in 2005, meaning the opportunity cost of its denuclearization has also increased,” Kim Nam-joong, head of the ministry’s Unification Policy Office, said in a report distributed ahead of a seminar in Seoul on Monday.

In 2005, North Korea vowed to give up its nuclear program in exchange for energy assistance and economic cooperation from several nations.

Kim pointed out that the North’s concerns have shifted to the security and stability of the current regime with its third-generation power succession amid the downfall of Middle Eastern countries that relinquished their nuclear programs.

According to Kim, the current approach focuses on offering economic aid, but it could be more in sync with the North’s current concerns.

“South Korea and the US must cooperate in drawing a fresh angle for negotiations with North Korea,” he said.