At least 13 people who were on the fishing boat have died. Seven have been rescued, but two others including the boat’s captain were missing. 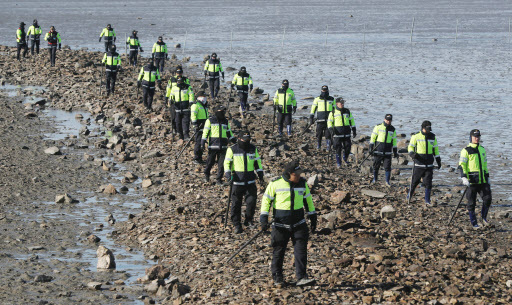 Officials from Incheon Metropolitan Police Agency on Monday morning search the coastal area of Ongjin County, Incheon, for two missing persons from a fishing tour boat that capsized Sunday after colliding with another vessel nearby. (Yonhap)
The 9.77-ton recreational fishing vessel Seonchang-1 carrying two crew members and 20 anglers crashed with the 336-ton Myeongjin-15 tanker near Yeongheung Island while trying to pass a narrow channel at around 6 a.m. on Sunday.

The captain of the tanker who had been steering at the time of the accident told the Coast Guard during questioning that he saw the fishing boat, but thought it would steer clear of the tanker.

The Incheon Maritime Police were set to request for a warrant Monday afternoon to detain the tanker’s captain and another crew member who was not in the steering room despite being on duty. The two were arrested on charges of professional negligence resulting in death.

On refueling vessels, two people normally work as a team on night duty. While one of them steers, the other is supposed to watch ahead and notify him of any emergency situations.

The Coast Guard said they have interrogated 27 people involved in the accident, including the owner of the tanker.

The Coast Guard, along with the Korean Register, was set to run a forensic investigation on board the Seonchang-1 which has been towed to the pier of the Incheon Maritime Police. Based on the results of the forensic examination and analysis of the Myeongjin-15’s GPS plotter data and CCTV footage, the Coast Guard plans to find out whether the captain of the tanker is responsible for speeding.

A total of 67 vessels, 15 airplanes and 82 divers were mobilized in the search for the missing people at sea, while some 1,380 people including 740 police officers and 130 soldiers were assigned to search the shores.

The Coast Guard has requested fishermen on the nearby islands for their cooperation as bodies can be found in the nets in fish farms.

Hwang Jun-hyun, chief of the Incheon Maritime Police station, told the media that the rescue boat didn’t have a nighttime navigation system and had to stop many times on its way because of a thunderstorm. The vessels with nighttime navigation were being repaired, he said.

The first divers able to explore the waters around the sunken boat arrived nearly 70 minutes after the first report.

Sunday’s tragedy was the worst involving a recreational fishing tour boat since 15 people were killed and three went missing in a similar accident in waters near Jeju Island in September 2015.

Accidents involving fishing boats have increased from 77 cases in 2013 and 86 cases in 2014 to 208 in 2016. Most of these fishing boats depart early in the morning and return around 4-5 p.m. They often sail at full speed in order to claim good fishing spots.

The Coast Guard said it planned to make fishing vessels undergo a mandatory safety inspection every year, instead of the current 2 1/2 years.