H.R. McMaster made the remark on "Fox News Sunday" after North Korea launched what appeared to be its most powerful intercontinental ballistic missile last week.

"The president is going to take care of it by, if we have to, doing more ourselves," he said. "But what we want to do is convince others it is in their interest to do more."

Trump remarked after Tuesday's launch that "It is a situation that we will handle" and that "We will take care of it." 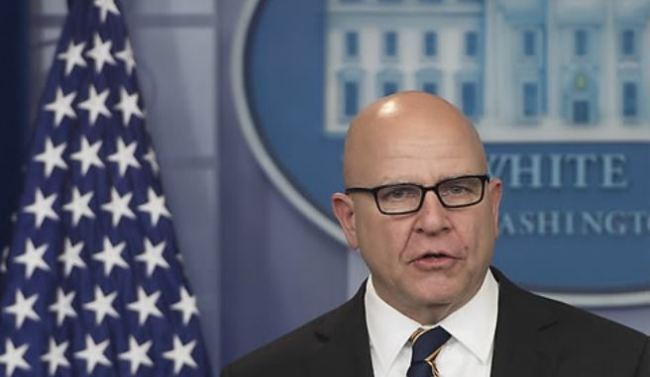 White House National Security Adviser H.R. McMaster. (AFP-Yonhap)
He then threatened to impose additional sanctions on Pyongyang, although they have yet to be announced.

"China, as you know, has taken some unprecedented actions," McMaster said, apparently referring to Beijing's backing of recent U.N. Security Council sanctions against North Korea. "And what we're asking China to do is not to do us or anybody else a favor but to act in China's interest. There's a real grave danger to China, to Russia, to all nations from a North Korea that is armed with nuclear weapons."

McMaster also noted the potential threat should South Korea, Japan and other nations decide to go nuclear to defend themselves from the North.

"That is not in China's interests. It's not in Russia's interests," he said. "So what the president is saying is, we all need to take care of it."

North Korea claimed Tuesday that its latest weapon was able to deliver a nuclear warhead to the entire US mainland.

Many experts have concurred with the claim, although there are doubts as to whether the regime has mastered the technology to miniaturize nuclear weapons and secure their atmospheric re-entry.

On Saturday, McMaster told a defense forum that he thinks the possibility of war with North Korea is "increasing every day."

"Every time he conducts a missile launch, a nuclear test, he gets better," the lieutenant general said, referring to North Korean leader Kim Jong-un. (Yonhap)