Outbound shipments in November stood at $49.67 billion, up from $45.3 billion a year earlier, according to data jointly compiled by the Ministry of Trade, Industry and Energy and the Korea Customs Service. The total value of exports during the first 11 months of this year hit a record high of $528.4 billion.

The country’s monthly exports have been on a steady rise since November 2016, steered by an uptrend in oil prices and recovering global trade.

Imports also made a 12.3 percent on-month growth to $41.83 billion in November. South Korea’s trade surplus came to $7.84 billion, making the 70th straight month in which its exports exceeded imports, according to the ministry. 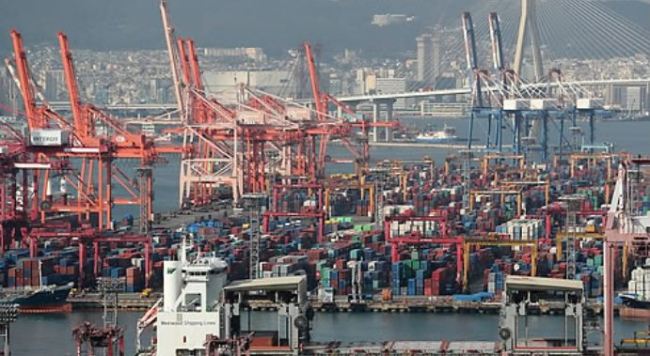 Containers waiting shipment at a port in Busan. (Yonhap)
By region, exports to China soared 20.5 percent, indicating a recovery of the Korea-China tensions which dampened bilateral trade earlier this year.

Exports to the US recovered the former growth trend in November, riding on increased sales of wireless communications, computers, and petrochemical and machinery products.

Leading businesses overall were the semiconductors, machinery and petrochemical products, the ministry explained.

The export sector has been the greatest contributor to the nation’s upbeat turn concerning its economic achievement for this year.

Based on the on-quarter economic growth in the July-September period, which marked the fastest in nearly seven years, the Bank of Korea confirmed its forecast that the country’s economy will expand by 3 percent or more by the end of the year.

The International Monetary Fund and the Organization for Economic Cooperation and Development have recently claimed that the figure will go as high as 3.2 percent.

“Should the economy grow 0.02 percent in the final quarter, the yearly growth rate will reach 3.2 percent,” said an official of the BOK, citing optimism on improved consumer sentiment, rising exports and fiscal spending.

Though positive about the export prospects for the first month of the new year, the ministry expressed some concerns over the strengthening of the Korean won in the global market, a factor which could cut down on the profitability of exporters.

“But as the stronger won is likely to burden exporters, the government will come up with measures to support small and medium-sized companies, should the Korean won continue to rise against the US dollar.”

Another downside is the possibility that the international oil price may rise further, which may then discourage consumer spending and corporate investment, according to a private think tank Hyundai Research Institute.

Its recent report claimed that for every $80 price rise in crude oil price per barrel, South Korea’s gross domestic product could fall by 0.96 percentage point.