Students are decked out in identical-looking, black, padded jackets that come down to their knees or even longer.

Photos of groups of students wearing the coats -- making it look part of the school uniform -- went viral on social media showing the incredible popularity of the coats among teens. 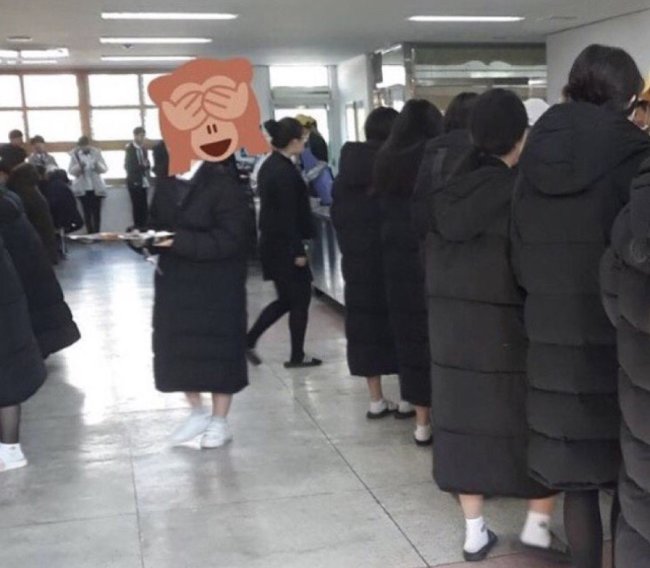 Bae Jin-woo, an 18-year-old high school student who owns a “caterpillar” coat, said his parents bought him one last month because it was so popular with his friends.

“At least a third of my classmates have these jackets. They are so popular among students this year. Celebrities wear it and advertise them,” he said.

“The length can get annoying when you walk and it gets in your way,” he added.

Kwon Joo-hyun, a homeroom teacher at a high school in Seoul’s Nowon-gu, also backed this, saying at least half of the students in her class wear them. “I think they like it because it’s warm.”

Youn Mi-young, a mother of two middle school students, said one reason for its popularity is that kids do not want to be singled out by classmates and want to keep up with the latest trend.

“Nowadays, it has become increasingly easier to share what they are wearing, or what they’d like to wear through the messaging app KakaoTalk.” Youn said.

In recent years, outdoor brands, including Millet, Canada Goose and Kolon Sport, were so popular among students that they earned the nickname “spine breakers,” meaning their expensive prices put a financial burden on parents.

The prices run up to some millions of won (thousands of dollars) for branded items, while alternatives with artificial filler cost only a fraction of this.

This year’s fad is more about long padded jackets themselves and less about the brands, teacher Kwon said.

“There are some students who wear expensive brands like Discovery and North Face, but not all,” she said.

A mother of a teenage girl, surnamed Kim, welcomed the popularity of long down jackets, because they would keep students warm, particularly female students who have to wear a skirt as part of their uniform.

“My daughter insisted on having one since last month because it’s a must-have this year, but the way I see it is that the longer one looked warmer anyway. So I’ve decided to buy a branded long coat for her despite the expensive price,” Kim said.

Some critics see in the latest school fashion the tendency of South Koreans to find comfort in uniformity, rather than individuality, which they say stifles artistic inspirations and creativity.

But Choi Mi-sook, head of a local school parents association, sees a hue of materialism in it.

“Some parents want to boost the self-esteem of their children by buying them expensive coats, but end up competing among parents themselves,” Choi said.