The country's gross domestic product expanded 1.5 percent in the third quarter from the previous three months, up 0.1 percentage point from earlier estimates, according to the preliminary data from the Bank of Korea.

The on-quarter growth accelerated from a 0.6 percent quarterly expansion three months earlier and marked the biggest rise since the second quarter of 2010, when the economy grew by 1.7 percent.

From a year earlier, the local economy grew 3.8 percent in the third quarter, compared with a 2.7 percent on-year expansion in the previous quarter.

Based on the better-than-expected performance in the third quarter, the BOK expects the country's economy to expand more than 3 percent for the whole of 2017. 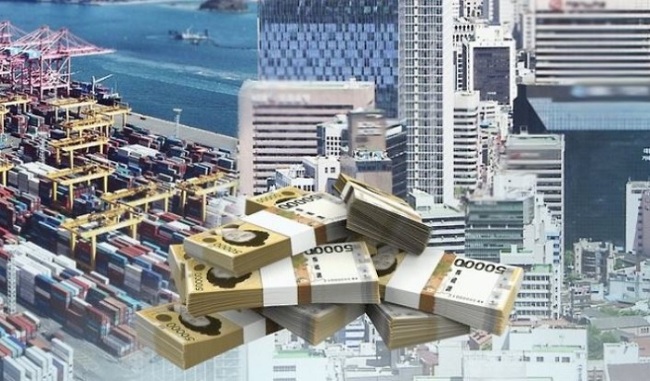 (Yonhap)
"If the economy grows 0.02 percent in the October-December quarter, the growth rate will reach 3.2 percent this year," said Kim Young-tai, director of the BOK's national accounts division. "There is optimism for the final quarter of this year on the back of improved consumer sentiment, rising exports and fiscal spending."

The BOK said manufacturing numbers rose 2.9 percent in the third quarter from three months earlier, while the construction and service sectors advanced 1.5 percent and 1.1 percent, respectively.

Government spending expanded 2.3 percent on-quarter on a rise in health insurance premiums, and construction investment gained 1.5 percent due mainly to the growth of residential building construction. Facility investment edged up 0.7 percent in the third quarter.

Consumer spending grew 0.8 percent in the third quarter from three months earlier, while exports jumped 6.1 percent during the same period on increased shipments of chips and chemical products.

Meanwhile, the BOK said the country's real gross national income rose 2.4 percent to a seasonally adjusted 411.4 trillion won ($378 billion) in the July-September period from a quarter earlier thanks to improving terms of trade.

If the growth pace continues further, the real GNI per capita will touch the $30,000 line next year for the first time, helped in part by the stronger local currency, the central bank said. South Korea's per capita GNI for last year stood at $27,561.