The largely anticipated action, which came in spite of North Korea’s latest military provocation the previous day, signaled an end to years of an easy-money policy and indicated a tightening monetary stance in upcoming years. 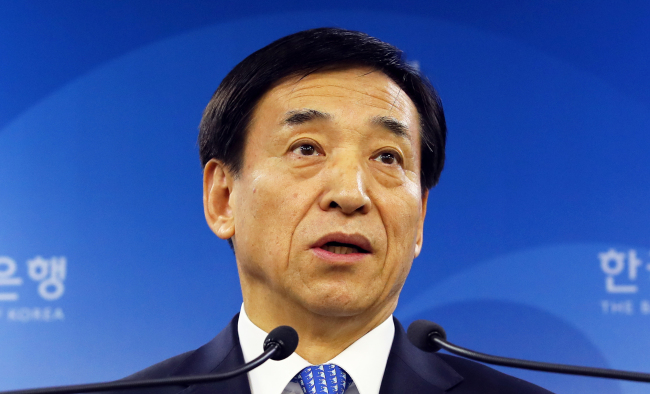 “The monetary policy board decided to increase the key rate from the current 1.25 percent to 1.5 percent,” said Bank of Korea Gov. Lee Ju-yeol in a press briefing.

The BOK chief cited the ongoing recovery trend of the global economy and the sound growth of the domestic economy, the latter steered by strong exports, active consumption and favorable investment.

Of the nine members of the board, Cho Dong-chul submitted a minority opinion, saying the rate hike should be held off for now, Lee added.

Financial market observers are now keen on when the next hike -- to raise the key rate to 1.75 percent -- will take place.

Given his term, which is to end in late March, it is speculated Lee could attempt an additional rate hike as early as January.

The governor, however, refrained from jumping to conclusions, pointing to the recent slowdown in key indices.

“The nation’s growth trend is expected to remain slightly above the forecast made in late October,” he said, calling for a gradual approach to monetary policy actions.

“We shall hereafter keep a thorough watch on (the nation‘s) growth and price fluctuation trends so as to make a careful judgment upon additional adjustments.”

Hints for a key rate hike have been building throughout the second half of the year.

In June, Lee said quantitative easing policies need to be adjusted at some point, heralding a rate hike in the near future.

In October, upon freezing the policy rate for the 16th consecutive month, he suggested a hike was plausible, with or without matching inflation.

“We may consider some adjustment (in the interest rate) without being restrained by (slow) inflation, as long as the economic recovery holds out in the midterm flow,” Lee said.

The BOK chief also said that “conditions are gradually maturing” for tightening monetary policies, laying the grounds for a key rate increase.

His gesture at tightening was backed by the recently improving economic forecast. While the Ministry of Strategy and Finance, along with the BOK, predicted 3 percent growth for this year, the International Monetary Fund and Organization for Economic Cooperation and Development took a step further and suggested a figure of 3.2 percent.

The strongest momentum was felt in the export sector, which recorded on-year growth of 18.5 percent in the third quarter, riding a lasting uptrend of semiconductors and the alleviation of Korea-China economic tensions.

The Composite Consumer Sentiment Index, according to the BOK, also rose 3.1 points to 112.3, the highest in more than six years.

Despite its positive signals, however, the key rate hike is likely to weigh down on the expansive level of the nation‘s household debt.

BOK data showed that the 0.25 percentage point hike is estimated to impose an additional interest burden of 2.3 trillion won ($2.12 billion) upon borrowers.

South Korea’s household credit as of the end of September stood at 1.4 quadrillion won, of which household loan balance accounted for 1.3 quadrillion won. Considering that the number of households was estimated at 19.5 million, according to Statistics Korea, the amount of debt per household was counted at 72.7 million won, exceeding 70 million won for the first time.