“I expect that North Korea’s provocations will not have a great impact on the domestic financial market,” Deputy Prime Minister and Finance Minister Kim Dong-yeon said in a meeting with economic-related ministers at Seoul Government Complex.

“But we will keep a close watch on the possibility that the volatility of the market may increase in the short term and actively respond to any change in the situation.”

The emergency ministerial meeting was called in response to Pyongyang’s long-range missile launch earlier in the day, which the reclusive regime claimed to be a successful intercontinental ballistic missile. 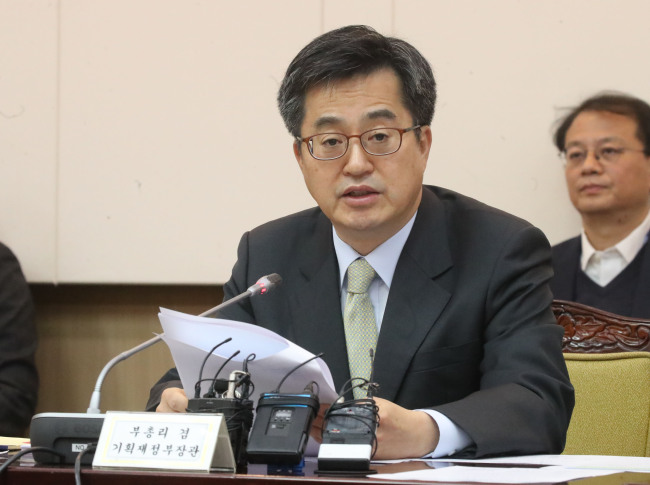 His confidence was backed by key market indexes.

The country’s benchmark stock market Kospi closed at 2,512.90, down 0.05 percent from the previous day. The Korean won closed at 1,076.8 won against the US dollar, hitting a record low in two years and seven months.

However, Pyongyang’s missile launch raised concerns over the negative impact it may have on Seoul’s monetary policies, as it came just a day ahead of a monetary policy panel meeting to review the nation’s policy interest rate.

The market consensus has been building up for some time that the central bank will raise the current record-low key interest rate of 1.25 percent by 0.25 percentage points as early as this year.

Last month, upon freezing the policy rate for the 16th consecutive month, Bank of Korea Gov. Lee Ju-yeol suggested that a hike would be announced in the near future, saying that “conditions are gradually maturing (for tightening monetary policies).”

The BOK refrained from commenting on whether the North’s latest launch would alter the key rate decision.

“Considering that North Korea’s missile launch had little impact on the US stock market, we expect that this will also be the case for our domestic market,” the Bank of Korea’s Deputy Gov. Yoon Myun-shik told reporters.

“It may, to some extent, affect the nondeliverable forward or the credit default swap indexes.”