The chairman of the Korea Fair Trade Commission also said his organization is devoted to increasing transparency to raise the market’s credibility for foreign businesses operating here.

“When looking at the stock market conditions and economic outlook, the Korean economy remains stable. ... I do believe the Korean economy will remain stable even (after) this morning’s missile launch by North Korea,” said the chairman of the Korea Fair Trade Commission, during a general membership meeting among members of the American Chamber of Commerce in Korea at Lotte Hotel in Seoul. 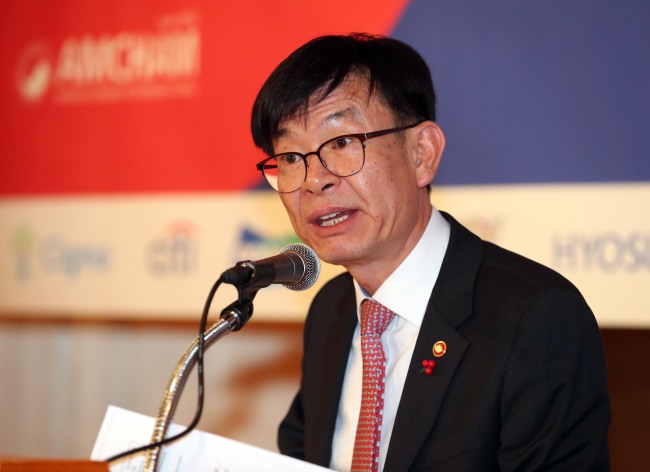 Kim Sang-jo, chairman of the Korea Fair Trade Commission, speaks during a general membership meeting with members of the American Chamber of Commerce in Korea at Lotte Hotel in Seoul on Wednesday. (Yonhap)
In an effort to assure the foreign investors community, Chairman Kim spoke of the economic importance of Korea and the US maintaining strong bilateral ties amid FTA revisions, as well as the FTC’s push to create a higher standard for business transparency to assure equal opportunities for local and global companies operating in the country.

“Korea and the United States are inseparable economic partners, which have been writing a history of mutual prosperity based on their strong alliance,” said Kim.

“The United States is the most important economic partner to Korea, which has grown based on export-driven foreign economics,” he continued, adding that prior to the enactment of the Korea-US FTA, the two nations had seen a 12 percent increase in trade despite a simultaneous decline in world trade.

Dubbed “chaebol sniper,” as he is a longtime activist against Korea’s conglomerate-centered economy, the FTC head has slapped sanctions and launched investigations into the nation’s top conglomerates since his appointment in June.

The FTC previously announced that 1,966 firms were currently on its monitoring list, as it moves to fight corruption in the private sector; increase measures to alleviate market monopoly among Korea’s family-run conglomerates; and tackle transparency issues, which many financial experts pinpoint as a hindrance to foreign investors’ confidence in the Korean market.

“The new government has decided to fundamentally change the economic paradigm to solve the structural problems,” he said. “The role of the FTC is more important than ever in creating a market environment that allows fair competition.”

“In order to promote new businesses based on entrepreneurship and creativity … I do believe that establishing a fair market is a must. Everyone should be given equal opportunity for business activities and be rewarded for their hard work through free competition,” Kim said, adding the FTC will take a firm stance to eradicate the abuse of power.

During the meeting, Jeffrey Jones, chairman of AmCham’s board of governors, said that one of the biggest obstacles faced by foreign business looking to invest in Korea is the high cost of compliance with regards to the costs of business practice investigations and audits.

When asked how investors can combat this issue, Chairman Kim responded by saying that although investment costs are inevitable, the FTC’s stricter regulations on corporate disclosure to promote transparency would lead to a more predictable business environment in Korea, eventually reducing costs.