The presidential office released its position toward a petition, posted on its homepage, whose signatories exceeded 200,000 in late October.

Cho Kuk, the senior presidential secretary for civil affairs, said the government will resume a survey on abortion next year and will make efforts to promote public debate to resolve the dispute.

Abortion is illegal in Korea except when the mother faces a serious health risk, or in cases of rape, incest or hereditary disorders. 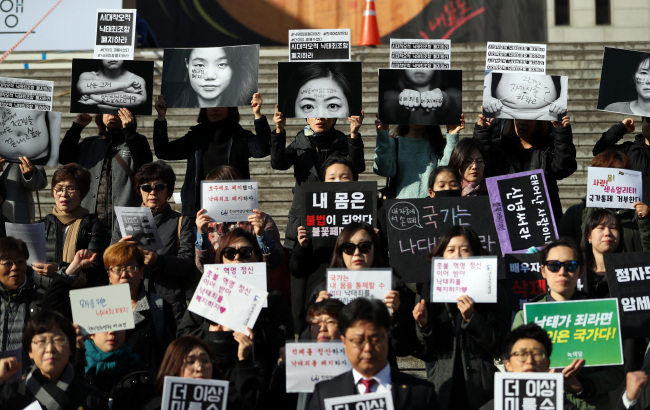 (Yonhap)
The petition to decriminalize the practice was filed in late September. On Oct. 29, the number of signatories surpassed the threshold which requires the presidential office to answer.

"(The government) will conduct a survey about termination of pregnancy next year to figure out the current status and causes.

The relevant debate will progress based on the result," Cho said in a press release and posting on Facebook.

The survey, which had been conducted every five years, was discontinued in 2010 when the government enhanced its crackdown on artificial abortion as part of efforts to boost the birthrate.

"We expect the process will prompt a new public debate," he said. The court ruled in 2012 in favor of the law.

Cho, a former law professor and civil activist, emphasized the need to strike the balance between the right to life and women's self-determination.

He pointed out the current ban has led to various side effects such as illegal, dangerous and highly expensive surgical operations.

"The current law holds only women legally accountable while leaving the state and men free from responsibility," he said. "In addition to a women's right to self-determination, the possibility of their rights to life and health being violated in such illegal procedures to end pregnancy should also be discussed." (Yonhap)