It will be a larger than usual Christmas performance for Camarata. The company, a group of Korean and expat singers and musicians in Seoul, has traditionally performed Handel’s “Messiah” each year, but conductor and Executive Director Ryan Goessl said he hoped this concert would help the company grow as an organization, while also raising money for good causes. 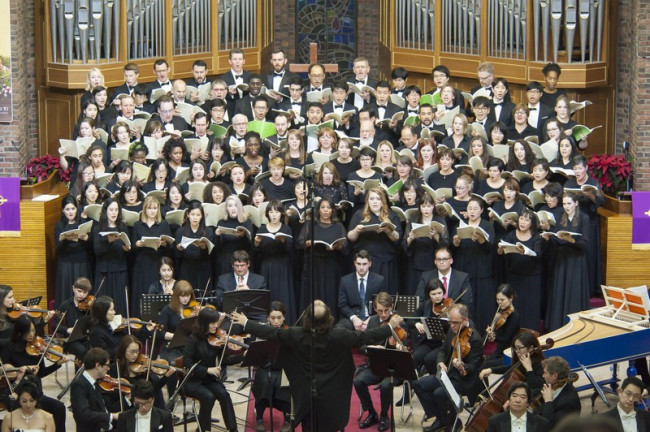 The Camarata Chorale and Orchestra

“We want to bring the message and the community that the Christmas season and the holiday season brings us, especially back in Western countries, and we want to promote that more here,” he said.

“We want to also promote this concept of giving and support for other people also, so that’s part of the reason behind doing this.”

Some of the proceeds from the concert will go to help North Korean refugees and the deaf community, via the local arm of the CBMC, an international organization of entrepreneurs and businesspeople looking to give back to their communities.

The concert will open with guest performances from the Onnuri Elder’s choir and two choirs from the CBMC.

Then Camarata will present what Goessl calls a “through concert,” involving Camarata's Chorale, Chamber, and Children's Choirs, accompanied by a 50-piece combined orchestra featuring the Camarata and Ars Nova orchestras.

The through concert is designed so that pieces follow on from another without pause. Music will include a mix of familiar Christmas songs and more formal choral works, including Tchaikovsky’s “Nutcracker Suite,” “The First Noel,” “Do you Hear What I Hear” and the concert’s theme-inspiring closer “Hope for Resolution.”

“The theme of the concert is ‘Hope for Resolution,’ which is also the title of our last song, our closing finale piece, and the concept behind that is resolving conflict in the world because there is so much going on these days that rather than allowing conflict to divide us we would like people to come together a lot more in peace and harmony,” Goessl explained.

K-pop singer MeiMei Jane will also sing at the concert and TBSeFM radio presenter Kurt Achin will narrate a selection from Handel’s “Messiah.”

“Kurt is going to do a storyline narration about Handel and his contributions to charity and supporting those in need. So it very much fits with the theme that we are doing,” said Goessl.

He explained that early performances of “Messiah” were used to raise money to help people held in debtor’s prison in Ireland, freeing 142 people.

“And then at the time there was a chapel being built, because unwed mothers faced a very difficult stigma so a lot of children that were born were starved to death, or murdered, basically,” Goessl added. “So this church was started to help these unwed mothers and raise the children to help them lead productive lives and Handel’s concert, he gave another concert because they ran out of money to build this church.”

“It’s going to be a great concert because it’s really on a grand scale and the church where we are doing it is the best sounding performance hall in Korea,” Goessl said.