The number of jobs offered by local businesses in South Korea edged up last year from a year earlier amid a protracted economic slump, government data showed Tuesday.

Some 3.61 million jobs were newly created last year, while 3.39 million position were lost. 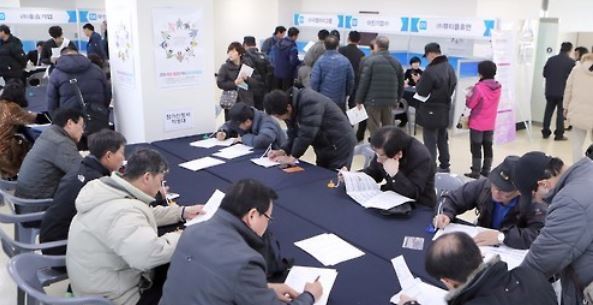 (Yonhap)
Incorporated companies offered 11.14 million jobs, or 48 percent of the total, over the cited period, with 2.13 million being employed in one-person operations and 2.44 million jobs set up by government agencies and public organizations.

By industry, the manufacturing sector provided 4.76 million jobs last year, followed by 3.03 million in the retail and wholesale businesses and 2.09 million in construction.

"The growth pace of job offerings by manufacturing sector slowed down sharply in 2016 from a year earlier due to an economic downturn," said an official from the statistics office. "The numbers will likely improve in 2017 as the South Korean economy is better off than the previous year."

But it shows some signs of recovery this year as the country's outbound shipments have been on a roll for every month of 2017. (Yonhap)