[ The Korea Herald – Send E-mail ]
Backed by FTA, US beef claims half of import market
By Julie Kim Jackson
Published : Nov 20, 2017 - 15:34
Updated : Nov 20, 2017 - 15:34
For the first time in 14 years, imports of US beef accounts for more than half of South Korea’s imported beef market on the back of the two countries’ free trade agreement, according to data from the Korea International Trade Association on Monday.

From January to October this year, US beef imports hit $989 million, making up 50.7 percent of the country’s beef import market, marking the first time it has exceeded 50 percent after hitting a record-high 75.9 percent in 2003. 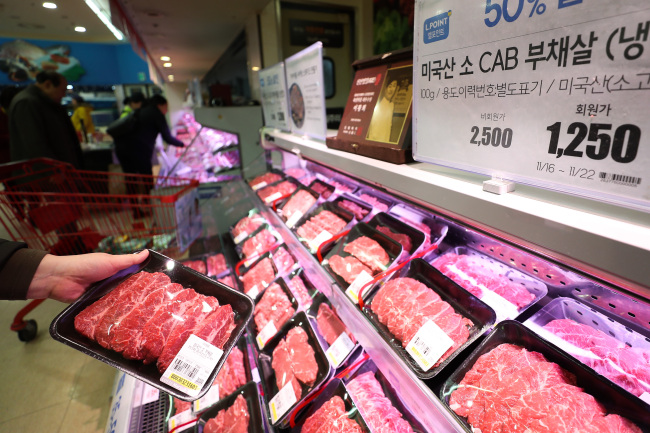 (Yonhap)
Back in 2003, the Korean government banned all imports of US beef following growing threats of mad cow disease spreading throughout the States. In 2004, the market share plummeted to 17.5 percent.

However, the US has since demanded the resumption of beef imports, arguing no additional cases of mad cow disease have occurred. After several rounds of negotiations between Korea and the US from 2006 to June 2008, the Seoul government decided to permit imports of boneless beef from cattle younger than 30 months old starting in late 2008.

Following the governments ruling and despite large-scale protests by local citizens claiming US beef was not safe to consume, beef imports from the States increased rapidly due to aggressive marketing and the enactment of the Korea-US FTA.

According to the data, after the FTA went into effect in March 2012, US beef exports to the peninsula steadily began to reclaim its stake of the local beef market, thanks to lower tariffs and more competitive prices compared to local beef products.