On Sunday, a highly pathogenic strain of H5N6 flu was discovered at a poultry farm with 12,000 ducks in Gochang, some 300 kilometers southwest of Seoul. This marked the first confirmed case in six months.

The Ministry of Agriculture, Food and Rural Affairs imposed a nationwide movement ban on poultry, farm vehicles and workers starting Monday for 48 hours to contain further outbreaks. The measures will be enforced for seven days in Gochang and nearby areas. 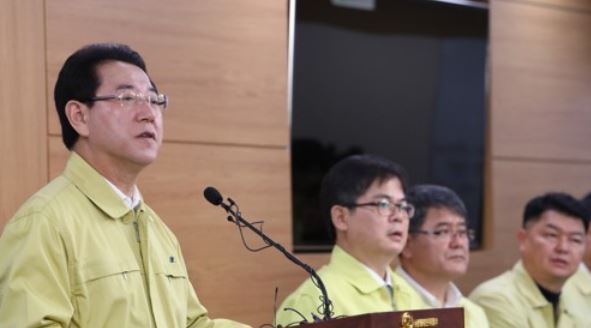 South Korea`s Agriculture Minister Kim Yung-rok (L) speaks at a press briefing in Sejong on Nov. 20, 2017. (Yonhap)
The government also raised its avian influenza alert status to the highest level to combat the disease from the outset.

"During the standstill period, the quarantine authorities will disinfect vehicles and facilities of all poultry farms across the country," Minister Kim Yung-rok said in a briefing. "All shops that sell chickens and ducks are subject to the nationwide disinfection."

Trading of chicks will be banned indefinitely, he added.