South Korean golfers combined for a record-tying 15 wins in the 2017 LPGA Tour season, sweeping up nearly half of the tournaments to reaffirm their dominance in women's golf.

In all, 11 South Koreans won 15 out of 33 tournaments this year, including three of the five majors. It ties the record for most LPGA wins by the South Korean contingent in one season, matching the mark set in 2015, when there were 31 tournaments.

Kim In-kyung led the way with three tour wins, including her first major title at the Ricoh Women's British Open. She was one of only two three-time winners this year, along with Feng Shanshan of China. 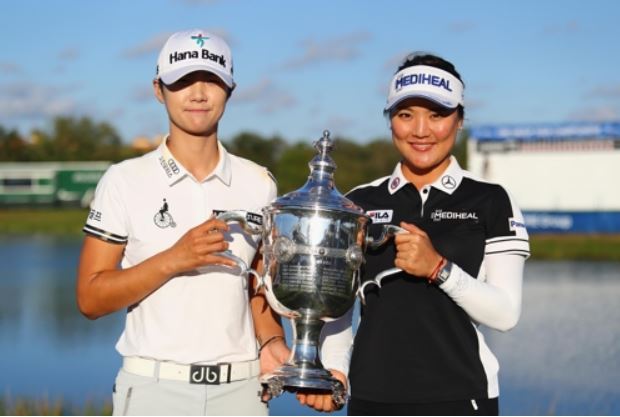 In this photo provided by the LPGA Tour, South Korean players Park Sung-hyun (L) and Ryu So-yeon hold the trophy for the Player of the Year after the conclusion of the CME Group Tour Championship in Naples, Florida, on Nov. 19, 2017. (Yonhap)
But the season clearly belonged to Park Sung-hyun and Ryu So-yeon, who shared the Player of the Year award after winning twice each. They also captured a major championship apiece.

Park became just the second rookie in LPGA history, after Nancy Lopez in 1978, to win the Rookie of the Year, the Player of the Year and the money title in a single season.

She ran away with the Rookie of the Year points race, powered by her maiden victory at the oldest LPGA major, the US Women's Open. Park led everyone in earnings, with a little over US$2.3 million, leaving Ryu in second place at $1.9 million. Park also pulled into a tie with Ryu atop the Player of the Year points standings by tying for sixth at the season-ending CME Group Tour Championship in Naples, Florida, on Sunday (local time).

Ryu won the season's first major, ANA Inspiration, in April. She reached No. 1 in the world rankings in late June and stayed there through early November, when Park dethroned her to become the first rookie to climb to No. 1. 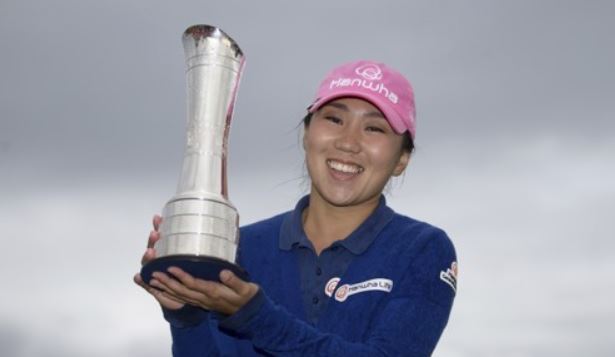 In this Associated Press file photo taken Aug. 6, 2017, Kim In-kyung of South Korea celebrates with the champion`s trophy after winning the Ricoh Women`s British Open at Kingsbarns Golf Links in Fife, Scotland. (Yonhap)
Former world No. 1 Park In-bee chipped in with a victory in March. Her victory at the HSBC Women's Champions was the third in a row by a Korean player, with Amy Yang and Jang Ha-na winning the two previous weeks.

Park's US Women's Open victory kicked off a five-tournament winning streak for South Koreans, which ended after Park's victory at the Canadian Pacific Women's Open. It was the longest such streak by South Korean players. 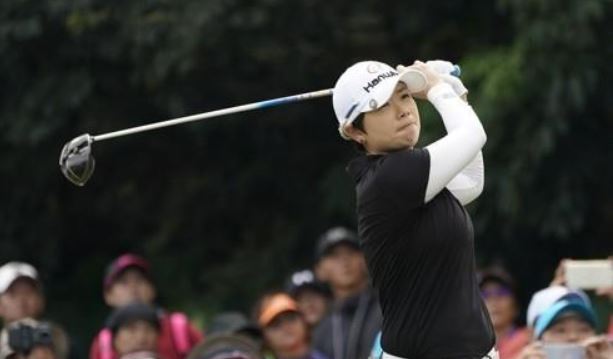 In this EPA file photo taken Oct. 22, 2017, Ji Eun-hee of South Korea tees off during the fourth round of the Swinging Skirts LPGA Taiwan Championship in Taipei at Miramar Resort and Country Club. (Yonhap)
Then at the LPGA KEB Hana Bank Championship, the only LPGA event held in South Korea each year, Korean tour star Ko Jin-young picked up her first LPGA title as a non-member.

Behind South Korea, the United States collected most wins with seven. (Yonhap)