[ The Korea Herald – Send E-mail ]
Gordon Ramsay calls Cass a ‘beer of the people’
By Won Ho-jung
Published : Nov 19, 2017 - 17:22
Updated : Nov 19, 2017 - 17:22
Michelin-starred chef and television personality Gordon Ramsay called Oriental Brewery‘s beer Cass a “beer of the people,” saying that its easy accessibility and fit with Korean cuisine was what drew him to endorse the brand. 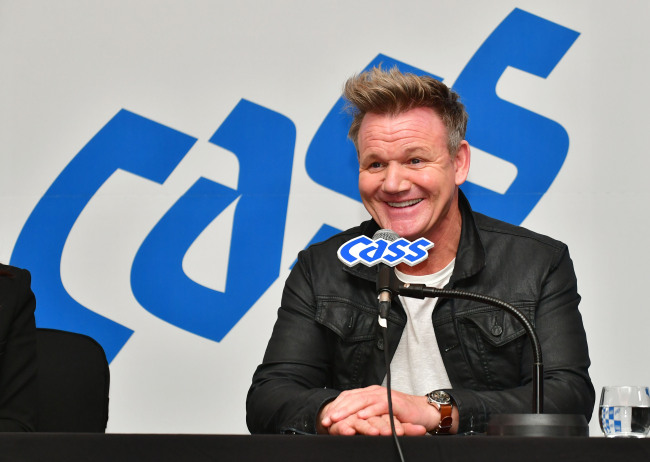 “The authenticity of Korean food with the No. 1 beer for me felt like a perfect match. It‘s by far the freshest, coolest ... and also in these difficult times, with the economy in recession, it is a beer that can easily be bought and have some fun with. It’s not pretentious.”

Ramsay received some criticism here on social media after agreeing to endorse Cass, with critics alleging Ramsay was not being sincere in his praise.

“I‘m far from embarrassed,” Ramsay said, brushing off the allegations.

“(Cass is) something I drank before the call (for the endorsement) came in. When I have Korean food, I don’t look for a wine list with the most expensive beer to go with it. I want a beer that‘s easy, fresh, and something I can drink without having to show off. I think that was the important thing.”

Regarding the preconception, especially among Westerners, that Korean beer is bad, Ramsay said, “Europeans have a very delicate palette. They’re not used to that level of spiciness, so they wouldn‘t understand the importance of cleansing and properly washing food down.”