PYEONGCHANG, South Korea -- The organizers of the 2018 PyeongChang Winter Games said Wednesday that competition venues will become even more accessible once new railways for bullet trains officially open next month.

Yeo Hyung-koo, secretary general of the PyeongChang Organizing Committee for the 2018 Olympic and Paralympic Winter Games, said high speed train operation is just around the corner, and it will allow visitors to travel from the country's main gateway to competition venues in two hours during the Feb. 9-25 Olympics.

"Accessibility is one of the important factors for both the Olympic and Paralympic Games, which International Olympic Committee and the International Paralympic Committee emphasize," Yeo said on a train from Seoul to PyeongChang in Gangwon Province, 180 kilometers east of the capital. "We're currently test operating the trains. We plan to have the opening ceremony for the new railways next month." 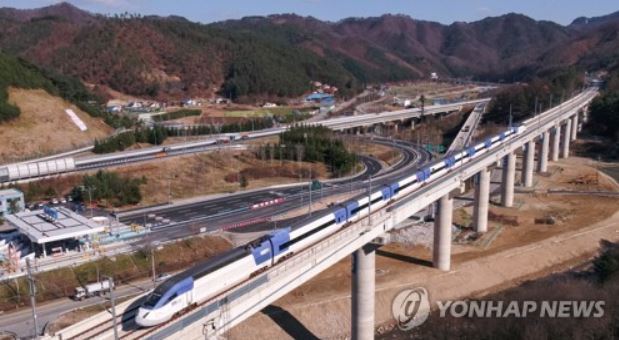 A KTX bullet train performs a test operation in PyeongChang County, Gangwon Province, on Nov. 15, 2017. The new train service will officially open in December. (Yonhap)
South Korea will operate KTX bullet trains from Incheon International Airport to Gangneung Station in Gangneung in Gangwon Province, a sub-host city for ice sports located 230 kilometers east of Seoul. The 277.5-kilometer railway will include a stop at Jinbu Station in PyeongChang, which will be the main train station for visitors who want to see snow sports venues and the opening and closing ceremonies for the Olympics.

Jinbu Station is a new station to accommodate train passengers for the PyeongChang Games. After a 10-month construction process that cost 18.1 billion won ($16.25 million), the station is near completion.

South Korean railway authorities will run 51 KTX trains per day between Jan. 26 and Feb. 28, with 16 of them leaving Incheon International Airport for Jinbu Station. From the airport, eight of the PyeongChang-bound trains will be non-stop and will reach Jinbu Station in 110 minutes. From Jinbu, it's another 16-minute ride to Gangneung.

The remaining 35 trains will depart from three stations in the nation's capital: Seoul Station, Cheongnyangni Station and Sangbong Station. It will take about 80 minutes from Seoul Station to Jinbu Station.

"This is the first high speed train service that links the west and the east of the nation," said Ji Won-tae, chief of the new railway preparations team at Korea Railroad Corp.. "Using the existing line, the trip would have taken five hours, but now it's a two-hour journey from Seoul metropolitan area."

Ji said KORAIL has upgraded existing tracks to operate the bullet trains. They will be able to travel with a maximum speed of 250 kilometers per hour (kph), but only on the 120.7-kilometer stretch starting at Seowonju Station.

"Although the train itself has a maximum speed of 300 kph, some existing railways near Seoul are not built for high speed trains," he said. "But this only means about a five-minute difference in travel time."

From Jinbu Station, visitors will be able to take shuttle buses to the competition venues in PyeongChang, and these rides will take no more than 20 minutes each.

"The venues are about 270 kilometers away from Seoul metropolitan area, so it's not easy for us to handle the transportation issues, but we're doing our best," said Kang Hee-up, who heads POCOG's transport and traffic bureau. "Our priority is to help athletes travel on time, and make sure visitors have easy access to the venues." (Yonhap)