South Korean female short track speed skaters said Wednesday they're focused on "the process" ahead of next year's Winter Olympics on home ice.

They will compete in the fourth and the final leg of the International Skating Union World Cup Short Track Speed Skating at Seoul's Mokdong Ice Rink starting Thursday. It will be the final qualifying event for the 2018 PyeongChang Winter Games. Three best results out of four World Cups in each race will be considered for Olympic qualification.

As expected, South Korean stars have had a good run through three World Cups, with former world champions Choi Min-jeong and Shim Suk-hee leading the way. 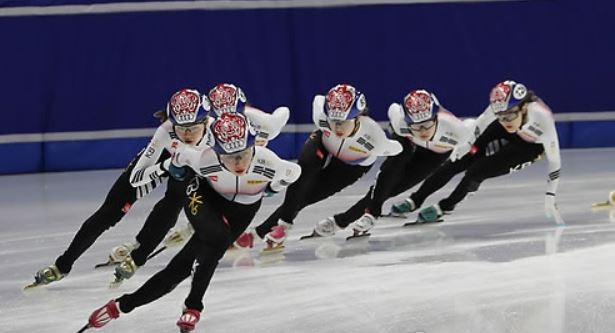 South Korean women`s national short track speed skaters practice at Mokdong Ice Rink in Seoul on Nov. 15, 2017, ahead of the International Skating Union (ISU) World Cup Short Track Speed Skating. (Yonhap)
At a press conference on the eve of the World Cup's opening day, the skaters said they won't get caught up with results at this point, since they have their eyes set on the ultimate prize at the Olympics.

"I see these World Cup races as part of the preparations for the Olympics, and I think experience in the World Cups should be really helpful," said Choi, who leads her delegation with six gold and one silver through three World Cups. "I'll enjoy some homecooking and support of our local fans."

Shim, a 2014 Olympic gold medalist, said she has been using the World Cups so far to identify areas for improvement ahead of PyeongChang.

"I think the most important takeaway so far during the World Cup season is that I was able to figure out what I need to do get better," Shim said, without elaborating further. "I'll try to feed off the energy of the home crowd here and to continue to improve."

South Korea, as the Olympic host, will be guaranteed to enter five men and five women in all races at PyeongChang, but will be limited to one skater in each race in that case.

And as the premium short track force, South Korea, which leads all countries with 21 Olympic gold medals all-time, will look to lock down maximum quota places across the board on merit. In individual races, each country can have up to three skaters.

"We got off to a great start at the first World Cup but I think other skaters have been improving, too," Cho said of the competition in Budapest where Choi swept the 500-meter, 1,000-meter and 1,500-meter gold medals and South Korea won the 3,000-meter title.

"Technically, I think they've gotten much better from last season, and we've made some tactical adjustments," Cho added. "There have been some positive changes and I hope our athletes can keep it up."

Both Choi and Shim have been disqualified during World Cup races this season after making physical contact with their rivals. While some jostling is virtually inevitable in short track, the two skaters said the best way to avoid disqualification is to just outperform the others.

"We must make sure we don't get into those tight situations," Choi said. "We just have to become stronger and faster." (Yonhap)