Police said Tuesday they have found no traces of alcohol or drugs in late actor Kim Joo-hyuk's body, reaffirming the preliminary conclusion that he died of a severe head injury inflicted in the tragic car accident late last month.

Police released the autopsy and biopsy results on the veteran actor's system conducted by the National Forensic Service, which indicated he was neither under the influence of alcohol nor drugs at the time of the crash.

The state crime lab also said it found nothing other than a small amount of antihistamine in the toxicology test. 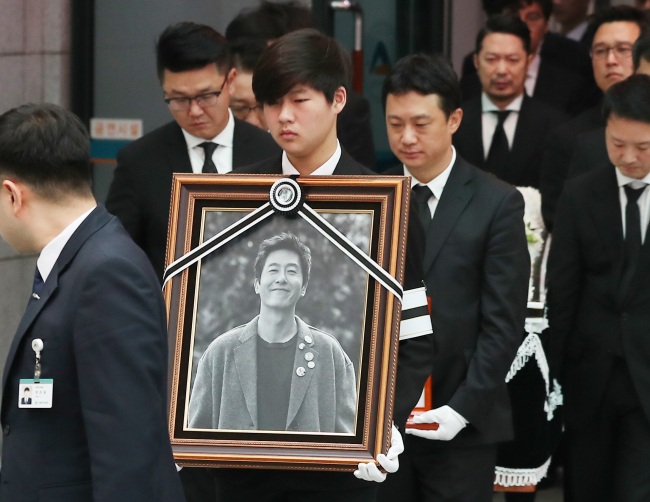 Kim Joo-hyuk’s funeral procession takes place Thursday morning at Asan Medical Center in Seoul. (Yonhap)
Kim died on Oct. 30 when his Mercedes SUV rear-ended a vehicle in front of it before smashing into a wall at an apartment complex and rolling down some stairs. He was 45.

His sudden death sent shockwaves through the public, with some raising suspicions about the cause of the accident on the Internet and other online communication channels.

Police said the possibility is low that he suffered a cardiac arrest while driving since the autopsy found no signs suggesting that or any problems in his nervous system. But it did not rule out that something in his heart or brain might have happened prior to the accident, given the witness account that Kim had leaned his head low against the steering wheel before he hit the car.

Police said they secured and retrieved the dashboard camera from his car, but it has helped them little with the investigation as it had only recorded images and no sound.

They said they hope to find a more concrete answer from the analysis result of his Mercedes, which will take at least another month. Police plan to carry out an on-site reconstruction of the accident on Wednesday, while working to further analyze the video camera for any fresh evidence, they added. (Yonhap)