Ahead of trade revision talks on the Korea-US FTA, the Ministry of Trade, Industry and Energy was to hold the public hearing at Coex in Seoul, in accordance with the FTA amendment negotiation procedures to collect public opinion on the trade deal.

The hearing was intended to include a short government presentation on its economic feasibility study as well as a panel of experts discussing how renegotiations will affect the local economy, prior to hearing questions and comments from members of the public. 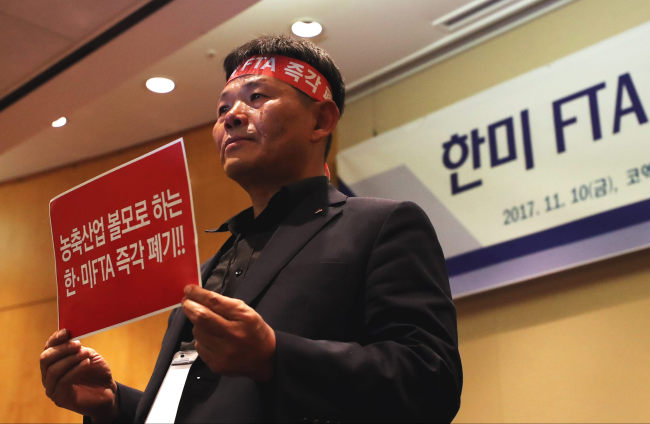 A farmer holding a placard that reads “terminate KORUS immediately” protests at a public hearing session on the Korea-US Free Trade Agreement on Friday morning. (Yonhap)
However, the event came to a halt after a handful of farmers stormed into the venue wearing red head bands that read “Terminate KORUS immediately.” Standing on tables, the protesters said the government’s feasibility study inaccurately represented the country’s struggling farming sector and that increased agricultural imports from the US threatened their livelihood.

The heated debate even lead to a number of violent outbursts from the protesters, who further warned that lowering tariffs on US agricultural products worsened the situation faced by local farmers.

“Eighty to 90 percent of the food you people are consuming on a daily basis is imported,” said one of the protesters. “Do you think that is right?”

“This is not an issue to be dealt with among farmers, this is a national issue.”

The ministry said it would take into consideration remarks made by members of the public and would notify its intention to renegotiate the FTA to the National Assembly by the end of the month. Its report to parliament would conclude Korea’s procedural steps to begin revision talks with Washington.

However, according to Song Ki-ho, a lawyer at Minbyun-Lawyers for a Democratic Society, the hearing did not meet the legal definition of a public forum on the FTA anyway.

A public hearing refers to a procedure by which the administrative agency collects opinions widely from any public person or through public discussion. But the hearing that was supposed to be held Friday was not sufficient to collect ideas from people in various walks of society, as it was more like a seminar.

Following the conclusion of the hearing, the Ministry of Trade, Industry and Energy released a statement saying it would establish a plan to conclude its FTA renegotiation preparations in accordance with Article 6 of the Trade Procedures Act and would report its stance to the National Assembly, “reflecting the results of the public hearing and its economic feasibility study.”

“In the future, we will continue to collect opinions on the revision of the KORUS FTA by various stakeholders,” the statement said. “In particular, the Ministry of Trade, Industry and Energy and the Ministry of Agriculture, Food and Rural Affairs will jointly hold a meeting on the agricultural and livestock industries as soon as possible in order to collect additional opinions these sectors.”

The study did not disclose detailed figures on each of the country’s trading sectors to avoid revealing Korea’s negotiation strategies, the Trade Ministry said.