[ The Korea Herald – Send E-mail ]
Palate-zinging Japanese tapas at Romantei
Izakaya draws inspiration from Tosa cuisine for unconventional eats
By Jean Oh
Published : Nov 10, 2017 - 18:14
Updated : Nov 10, 2017 - 18:14
Ikazaya, essentially Japanese tapas bars, are a longstanding fixture of Seoul’s dining scene, a popular option for those who want a second round of nibbles and tipples on a jovial evening out.

While many successful izakaya have built up a reputation on more traditional eats like yakitori and platters of beautifully arranged sashimi moriawase, Romantei is rapidly building a buzz with its unconventional compilation of palate-zinging bites.

“We use an eclectic range of ingredients,” said co-owner Hong Suk-jin, 34. “We experiment with a wide range of ideas.” 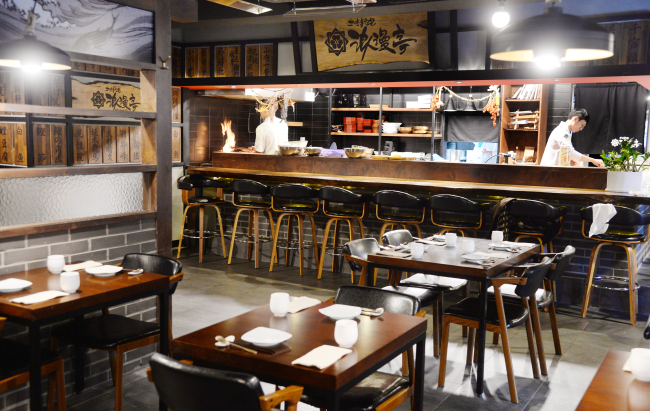 Romantei, a Japanese izakaya whose fare is inspired by Tosa cuisine, opened this June in Sinsa-dong, Seoul. (Photo credit: Park Hyun-koo/The Korea Herald)
At Romantei, which opened in Seoul’s Sinsa-dong this June, one will find food influenced by various cuisines.

The primary and overarching influence, however, is cuisine from the Kochi Prefecture of Shikoku Island in Japan.

Hong, a successful restaurateur who jointly helmed two Japanese establishments in Seoul before Romantei, was inspired by the food in Kochi, referred to as Tosa cuisine, after a recent visit.

“Tosa is very famous for its fresh katsuo, so there are a lot of eateries that sell katsuo tataki and warayaki,” said Hong.

Many may be familiar with katsuo -- skipjack tuna -- in the form of dried and smoked flakes called katsuobushi, which are often used in broths in Japanese cuisine.

In Kochi, however, katsuo is customarily eaten as tataki -- grilled over a straw fire, a method of cooking called warayaki, for a smoky, steak-like seared crust and a fresh, ruby red center.

The katsuo is then cut into thick slices and served with garlic. 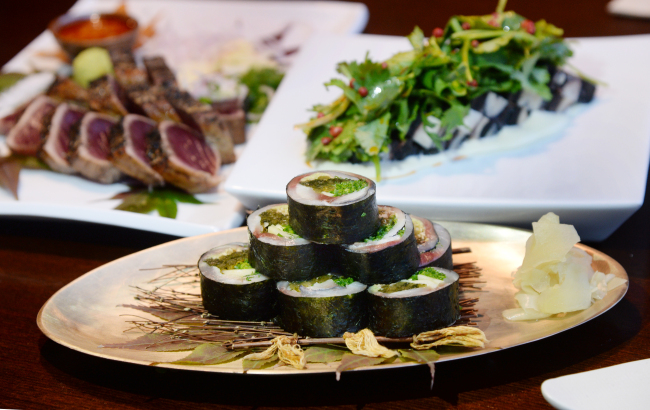 Romantei’s isobe maki (front), octopus terrine (right, back), katsuo tataki (left, back) is seared over a straw fire and served with slices of garlic in a nod to the tradition of Tosa cuisine. (Photo credit: Park Hyun-koo/The Korea Herald)
One will find a variation of this and other dishes that have earned their smoky flavors from a stint over a straw fire at Romantei.

For instance, striploin is initially cooked over a straw fire before being cut into thick, luscious slices and served perched over Brussels sprouts, cherry tomatoes and mushrooms with barley miso and wasabi.

Those juicy slices of beef, still deep pink in the center, pair well with the cool fieriness of the wasabi, the warm, nutty richness of the miso and all those vegetables.

In addition to its interpretation of warayaki, Romantei also boasts a memorable selection of small plates, including their octopus terrine and its isobe maki, both of which Hong admits are among his favorites.

“We were inspired by dotori muk,” Hong said, sending a nod to the traditional Korean dish of acorn jelly with octopus terrine.

Slow-cooked slices of octopus are embedded in a gelatin crafted with squid ink. The terrine is served over garlic puree and is topped with fresh cilantro and pink peppercorns.

All textures are in play with this dish, from the soft puree to the springy chew of the terrine to the fresh crispness of the cilantro and the spicy crunch of the peppercorns.

The oily richness of that unctuous fish, the nose-pinching heat of the garlic, the freshness of the greens all come together in this healthy-ish dish that begs to be paired with a cool glass of cold sake.

Romantei’s selection of tempura-style eats are also equally good, from hunks of snowy, uber-soft fried sea eel with crisp crusts to succulent rectangles of pork jowl meat that have been breaded in a mix of panko and parae (sea lettuce), fried and served over onions and rucola with fish sauce.

Even their most pared-down of dishes, like their bowl of sea urchin topped with salmon roe served with a side of dried laver, are delicious, yielding creamy spoonfuls of briny umami. 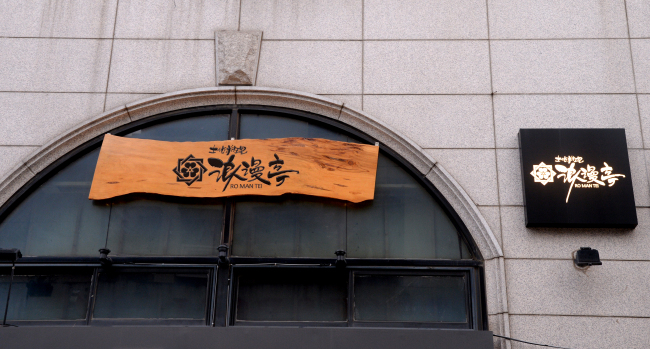