Four were killed and one injured after an oil tanker rammed into their cars and caught fire on a road leading to a tunnel in Changwon, about 400 kilometers south of Seoul, firefighters said Thursday.

The 5-ton oil tanker exploded on the highway approaching the Changwon Tunnel in South Gyeongsang Province at around 1:20 p.m., the authorities said. The fire quickly spread to nine other vehicles in the area, engulfing them in flames, they said. 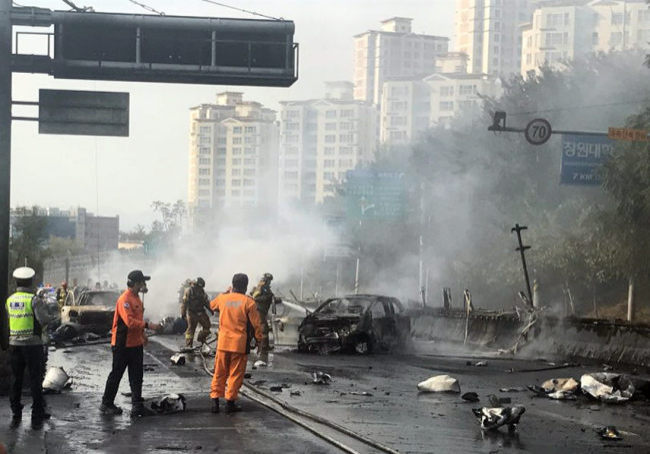 (Yonhap)
The oil tank apparently fell off the truck as it crossed over the center line and hit the median strip. The tank crashed into the vehicles on the opposite side of the road.

The firefighters confirmed there were four fatalities, including an infant, and one injured. They said it would take time to identify them due to the damage to their bodies. The fire was brought under control within an hour.

The authorities said a flaw in the truck's brakes may have caused the accident as witnesses told them they saw the vehicle zigzagging on the road.

Police said they began conducting an investigation to figure out the exact cause of the crash, including possible mechanical flaws. (Yonhap)