INCHEON -- South Korean teenage figure skater You Young served as the first torchbearer for the 2018 PyeongChang Winter Olympics on Wednesday, an experience she said she will cherish forever.

The 13-year-old carried the torch for the first Winter Olympics to take place in South Korea, as the relay commenced following the arrival of the Olympic flame from Greece earlier Wednesday.

She trotted 200 meters on Incheon Bridge, near Incheon International Airport west of Seoul, surrounded by hundreds of domestic and international journalists, Olympic volunteers and fans. 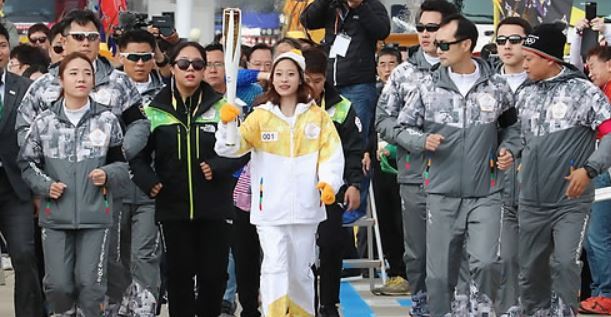 South Korean figure skater You Young (C) carries the torch for the 2018 PyeongChang Winter Olympics on Incheon Bridge in Incheon on Nov. 1, 2017. (Yonhap)
"I feel so good and am so honored to be the first one," You said. "I am just so happy right now. I'll remember this day forever."

You won't be old enough to compete at PyeongChang next February, as she'll still be 13. But she is among a few up-and-coming South Korean figure skaters who have shown promise for the 2022 Winter Olympics in Beijing.

In January last year, You became the youngest national champion in the ladies' singles event at age 11, breaking the previous record held by Kim Yu-na, the 2010 Olympic gold medalist.

Following You on the first day of the relay was Yoo Jae-suk, popular television personality. They were joined by singer-actress Suzy and two-time Olympic speed skating champion Lee Sang-hwa.

The relay route will cover 2,018 kilometers -- the same number as the year in which the Olympics is taking place -- by plane, ship, train, sailboat, robot, cable car, bike, zip line and on foot. The torch will travel through nine provinces, eight major cities, and 151 counties and districts.

The relay will take place under the slogan "Let Everyone Shine," a nod to the Olympic flame and PyeongChang's hopes of bringing the world together.