One of the main focuses of this year’s forum is stressing the need for regional cooperation in tackling illegal logging and related product trade restrictions. The ministers meeting highlighted its member countries’ varying illegal timber trade restriction systems; trade promotion policies on legal forest products; and efforts and cooperation methods utilized by other international organizations in order to prevent illegal logging.

According to a statement from the Korea Forest Service, the government is anticipating topic discussions relayed at this year’s meeting of forestry officials will help speed up the introduction of new systems to add further restrictions against illegal logging and related trading. 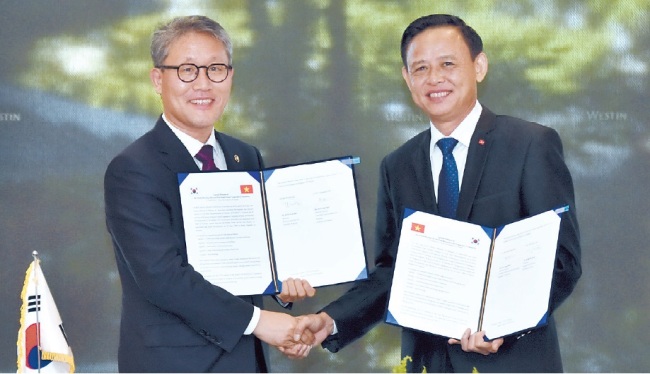 Korea Forest Service Minister Kim Jae-hyun (left) shakes hands with Vietnam’s Vice Minister for Agriculture and Rural Development Ha Cong Tuan after agreeing on cooperation in investment, joint research and preserving seeds for forests at the ninth Korea-Viet Nam Forest Cooperative Committee held on the sidelines of the APEC meeting of ministers responsible for forestry in Seoul on Tuesday. (KFS)
“The international community sees illegal logging as a major cause of deforestation and damage to fair trade practices, which is why the international community adopted the ‘Forest Action Plan’ in 1998 at the G-8 Summit in Birmingham, England, in an effort to combat the issue,” the statement said.

APEC, with its 21 member countries, is a regional economic forum established in 1989 to leverage the growing interdependence of the Asia-Pacific by promoting balanced, inclusive, sustainable, innovative and secure growth and by accelerating regional economic integration.

At the APEC level, the Expert Group on Illegal Logging and Associated Trade was established in 2011 to deal with illegal harvesting of forest products in relation to the implementation of appropriate measures to prohibit the trade of forest products. According to the Korea Forest Service, the United States, European Union, Australia, Indonesia and Japan have all adopted and implemented relevant systems, creating a positive effect on the sustainability of the global environmental protection and resources.

“It is necessary to recognize and encourage fair and transparent policies and mechanisms for the trade of forest products by mutual sharing of restrictions on imports and exports between countries for illegal logging,” the Korea Forest Service said.

Korean Prime Minister Lee Nak-yon on Monday also called for multilateral cooperation in the Asia-Pacific region to work on preventing illegal logging and promote forestation as a method to tackle global environmental issues such as climate change.

Lee cited Korea’s efforts toward reforestation following the Korean War, stating the peninsula was able to successful recover and expand its forested areas over the span of two decades thanks to assistance and cooperation from the international community.

Job creation through forestry was another hot topic focused on at this year’s meeting.

The forum discussed effective ways for government to engage in employment and profit-making activities in rural areas by exchanging members’ government-level support systems in rural communities, as well as policy plans on the creation of forest jobs based on sustainable forest management.

“Forests are developing as a cross-cutting issue that combines environmental issues related to climate change and poverty, as well as being tied to various contemporary societal issues,” said the Korea Forest Service.

“In 2015, the UN proposed sustainable development targets as well as several goals related to terrestrial ecosystems, such as terrestrial ecosystems, climate change and urban environments such as forests, swamps, dry land and mountains. We want to explore what ways we can proactively respond to global issues and develop new ways to create new value.”