The Moon-Xi summit, the second of its kind, will be held on the sidelines of the Asia-Pacific Economic Cooperation forum that will be held in Da Nang, Vietnam, next Tuesday through Wednesday, according to Nam Gwan-pyo, a director of the presidential National Security Office.

The announcement came shortly after the countries released a joint press release, vowing to put their ties back on the right track.

The upcoming summit, Nam said, "can be said to be the first step in implementing the agreement to quickly put exchanges between the two countries in all areas on the right track."

Seoul and Beijing have been at odds since the new Moon Jae-in administration decided to fully deploy the THAAD US missile defense system following a series of North Korean missile tests. 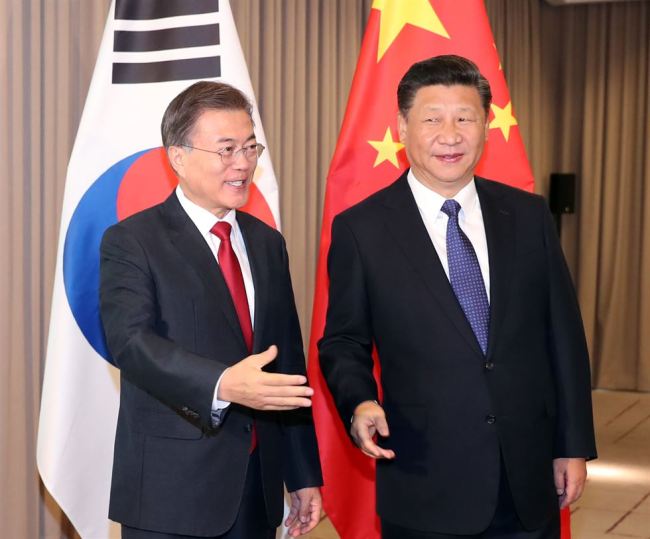 (Yonhap)
Moon and Xi first met in Berlin in July, before their participation in the Group of 20 summit in Hamburg, Germany.

Nam said the South Korean president may also hold bilateral talks with Chinese Prime Minister Li Keqiang on the sidelines of a regional forum hosted by the Association of Southeast Asian Nations slated to be held in Manila from Nov. 12-14.

The Moon-Li meeting, if held, will again underscore an improvement in the Korea-China relations, a Cheong Wa Dae official said, while speaking on condition of anonymity.

"Because Prime Minister Li is in charge of the bilateral relationship between South Korea and China, the meeting will be a chance to discuss ways to improve their ties," the official told reporters.

The official added the South Korean leader may also visit China before the year's end, which will mark his first trip to the Asian country since taking office in May.

The joint statement apparently came as Beijing, too, sees the need for joint efforts to tame North Korea, which staged its sixth and most powerful nuclear test Sept. 3 despite a series of warnings from its largest communist ally China.