Texture, flavor and presentation are all accounted for at Raffine, a French establishment that showcases cerebral cuisine from its 18-seat perch in Sinsa-dong, Seoul.

“We want the food to be fresh but not flamboyant,” said head chef Lee Dae-ryuk, 31, explaining how the goal is to give diners something new but not something over-the-top.

This attitude is in line with Paris’ neo-bistro trend, where chefs are stepping away from tradition to present their own personal takes on cuisine, often in small and casual spaces at more wallet-friendly prices.

“When I was working in Paris, neo-bistros were on the rise,” said Raffine owner Erika Sumi Bang, 31, who says she thoroughly enjoyed eating at these Parisian hot spots and when the opportunity arose, decided to open one here in Seoul. 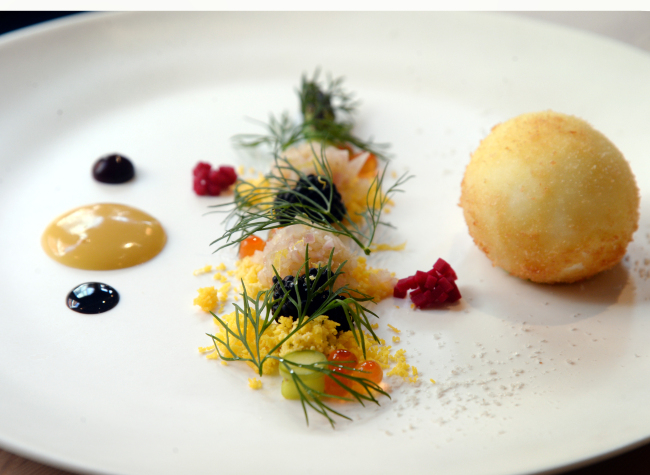 Food from Raffine Park Hyun-koo/ The Korea Herald
Bang met with Lee, a friend who had recently studied at Le Cordon Bleu-Sookmyung, and after some discussion, Lee ended up helming the kitchen of a restaurant where, in his words, “we could just do it our way in a small space.”

“Our way” translates to beautifully presented food that is incredibly well thought-out, intricate and, at times, playful.

For instance, Lee and his team send a nod to Italian pasta with a flavorful squid-and-pancetta dish.

To mimic pasta, the squid is cut into long strands before being tossed in a sauce crafted from pork fat, star anise, nutmeg, clove, cream and Comte cheese.

“We cook the squid in the oven just enough so that it absorbs the sauce,” said Lee, who revealed that using pork fat adds an extra dimension to the dish.

That pork fat is amped up by the in-house pancetta -- cured over the course of three months before being cut into slim rectangles and pan-fried prior to plating.

Those salty bits of Italian bacon act as the perfect foil to those creamy, soft, slightly chewy strands.

Grated Mimolette cheese adds more heft to a dish that is meant to be scooped onto the little slices of toasted baguette served with it.

Then there is their approach to cod, which is served up soft yet resilient, topped with toasted coconut and bathed in a sauce of Chardonnay, butter and cream and paired with a beautiful tourney-cut potato.

Other dishes include an expertly pan-seared scallop paired with scallion-cream sauce and powdered sesame seed oil, a dessert of Rooibos tea-infused glace with banana and passion fruit and a fried poached egg paired with asparagus, salmon roe and herring roe.

Sprigs of vibrant dill add a crucial layer of flavor to the creamy egg and sweet asparagus.

Each dish conveys the hard and delicate work that went into it, but in a subtle fashion, where the flavors and textures do not clash but almost melt into one another.

“We want to serve food that you cannot experience at home,” Lee explained.

“I want to showcase the French food I know,” said Lee, who spent many years living and eating in France before deciding to study the culinary arts professionally.

Five months into business, both Bang and Lee hint at more to come, from experimentation with fermentation techniques to seasonal changes to the lunch and dinner course menu in November.