In its report to an annual parliamentary audit by the National Assembly’s Defense Committee, the Army said they would develop the “Hyunmoo IV” surface-to-surface missile, powerful enough to destroy North Korea’s underground military facilities and command center.

Combined with indigenous tactical surface-to-surface missiles and Hyunmoo-class intermediate-range ballistic missiles, the advanced pre-emptive strike capability would inflict “unbearable cost” to the North by neutralizing the North’s nuclear and missile sites, as well as long-range artillery units, the army said.

“We would use those three-types of missiles as the first salvo of the missile strike and concentrate them during the initial phase of war to destroy North Korea’s long-range artillery units and missiles located in ballistic missile operating area,” the army said in its report to a parliamentary audit. 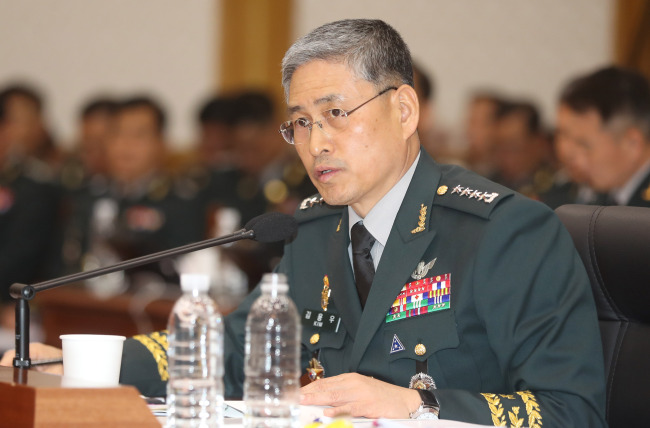 South Korea`s Army Chief of Staff Gen. Kim Yong-woo. Yonhap
South Korea has been suspected of working on advancing ballistic missiles capability since it struck a deal with the US to scrap limits on the missiles’ payload in September. Previously, Seoul was banned from fitting warheads weighing more than 500 kilograms on its ballistic missiles with a range of over 800 kilometers.

The development of such an advanced ballistic missile is a part of the Army’s effort to establish a “game-changing” operational concept, which is designed to minimize civilian casualties and end the war as soon as possible, the Army said. 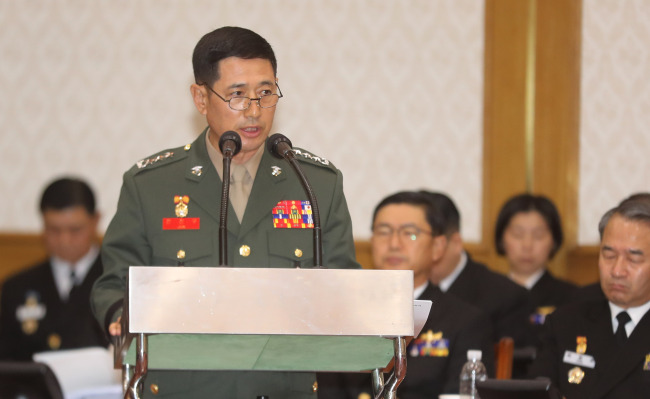 South Korea`s Marine Corps’ commander Gen. Jun Jin-goo. Yonhap
During the parliamentary audit, the Marine Corps said the new command will be built around 2020 and based on the current Northwestern Island Defense Command. It was formed in 2011 following North Korea’s artillery attack on Yeongpyeongdo, one of the farmost islands in the West Sea.

The announcement came amid North Korea’s increasing threat against South Korea’s border areas. In August, Pyongyang revealed its military training designed to seize Yeongpyeongdo and its nearby Baengnyeongdo.

Some lawmakers voiced concerns that if North Korea feels confident about its nuclear and missile advantage against South Korea, it might try to forcefully occupy those near-border islands. Last week, South Korea’s Defense Minister Song Young-moo acknowledged that it is a plausible scenario.

“In the event of the enemy’s provocations, front-line units can’t afford to judge whether this is a localized skirmish or an all-out war. We will retaliate as if it is an all-out war,” Um told lawmakers. “We have maintained a robust readiness posture.”

The Marines Corps said it would establish a unit to defend Dokdo, a set of islets in the East Sea that have been the subject of a territorial dispute with Japan. Dubbed the “Ulleung unit” -- named after the island near Dokdo -- the unit will interdict infiltration attempts near the water. The Marine Corps seeks to build the unit by 2020.

In a bid to build an “aggressive operation” against North Korea’s provocations, the Navy also announced a plan to create a new maneuver fleet and an aviation command by 2023.

If formed, the new fleet will include several 6,000-ton KDDX Aegis destroyers and three additional 7,600-ton KDX-III Aegis destroyers. The KDDX ships, which will be built in the mid-2020s, are to be equipped with an advanced ballistic missile defense system and ship-to-surface missiles.