Taekwondo has generated the most corruption complaints among South Korean sports, a local lawmaker said Wednesday.

According to Rep. Kwak Sang-do of the Liberty Korea Party, 742 corruption cases were reported to the Ministry of Culture, Sports and Tourism's center for sports corruption between 2014 and August 2017. The ministry's data showed the center completed investigations into 559 cases and 122 of them were transferred to law enforcement authorities or processed with disciplinary actions. 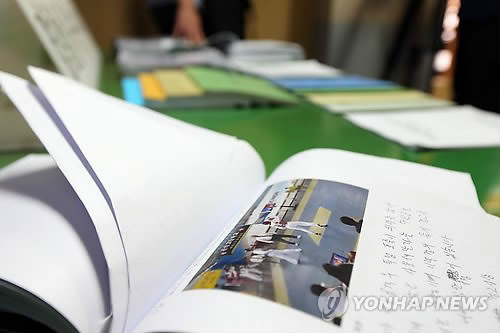 This file photo taken Sept. 15, 2014, shows a report about match-fixing in taekwondo unveiled by the Korean National Police Agency in Seoul. (Yonhap)
The most complaints were reported in taekwondo with 106 cases, followed by baseball with 71, and football with 63. The ministry data showed that winter sports were also not free from corruption:

22 complaints were filed in ice skating, followed by ice hockey with 15, skiing with 10 and bobsleigh with four complaints. South Korea's first ever Winter Olympic Games is just four months away.

The Korean Sport & Olympic Committee, South Korea's top sports body, was criticized recently after it amended its code to allow for commuting of the sentences of officials convicted of any of four major offenses -- embezzlement or breach of duty, school admission corruption related to sports, violent or sexual assault, or match-fixing. Following the revision, 24 officials applied for a pardon and five of them saw their lifetime bans reduced to reprimands or five-year suspension.

"Sports corruption occurs every year and people call for it to be corrected, but the government is taking a step backwards," Kwak said. "We must end this vicious cycle and live up to people's belief that sports should be fair and clean." (Yonhap)